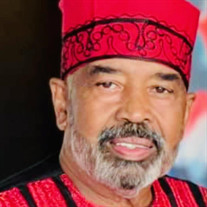 Not sure what to send?

Winston Lee Hill was born on August 21, 1951, to the union of Edmond and Inez Hill in Crowley, Louisiana. He departed this life on Thursday, May 12, 2022, at the Atlanta VA Medical Center in Decatur, GA. He was preceded in death by his parents Edmond and Inez Hill, his brother Arthur Hill (Eddie) and his sisters Leila Hill-Poullard (Horace) and Wille Mae Hill-Bernard all of Crowley, LA. Winston accepted Christ at an early age and was baptized at First Church of God in Christ (COGIC) in Crowley, LA. He received his formal education in the Acadia Parish in Louisiana where he attended Ross High School and was an outstanding-student athlete, lettering in baseball, basketball, and football. He graduated as a proud member of the Ross High School Class of 1969 and in the Fall of 1969, he went on to attend Grambling State University and later graduated with his Bachelor of Arts in Speech and Drama in May of 1973. Shortly after graduation, he entered the U. S. Army and served over 23 years in Personnel/Human Resource Management, achieving the rank of Master Sergeant (E8) before retiring honorably December 31, 1997. After retiring he entered the private sector working for Washington State Department of Transportation (WSDOT) as a Disadvantaged Business Enterprise Officer, where he certified minority business owners to conduct business with the State of Washington. In January 2000, Winston and his family relocated to Atlanta, Georgia where he worked for Georgia Department of Transportation serving in the same capacity he did at (WSDOT) until he retired in the summer of 2013. In the Fall of 2013, he was not quite ready to retire and accepted a position as the Director of Human Resources of Hojeij Branded Foods at Hartsfield-Jackson Atlanta Airport where he worked for several years before he officially retired. Winston met the love of his life Marquita while they both were stationed in the military at Fort Lewis, Washington. They were united in matrimony in Las Vegas, NV on September 5, 1998, and to this union was born their youngest son Brandon. Winston simply loved to enjoy life, eating southern cuisine, family gatherings, attending sporting events and most importantly the fellowship he shared with his brotherhood to include Raymond Ballou, Fred Mackson, DP Clay, Mike Lynch, Tony Parker, Lavant Perry, Joe Holmes, Dr David Scott, Joe Gant, George Gilliam, Terreance Dubose, Troy and Steve Woolridge and Cesar Burgess. His sisterhood Debra Nailing, Agnes Townsend, Mary Bostick-Goodson, Jackie Ballou, Mona Gamble, Sarah Smith, Doris Harris, Kim Smith, and Cynthia Scott. Winston never met a stranger and had a genuine passion for meeting and connecting with new people. He was a huge advocate for youth sports and played a pivotal role in the success and growth of a wide range of sports at Rock Chapel Park Youth Association in Dekalb County, GA where he held the following roles: Director of Basketball, VP of Programs and VP of Finance. He leaves to cherish his memories his wife Marquita Mathews-Hill of Lithonia, GA, his brother Ed Hill (Sandy) of Texas City, TX, his sisters Diane Thorne of Crowley; LA, Wonda Hill-Rutherford (Earnie) of Anna, TX and Sharon Hill of Locust Grove, GA. His children Yvonnana Sam of Arlington, TX, Winston Andrews (Antonella) of Lake Charles, LA, Latrenda Faye Bernard of Port Hueneme, CA, Dwayne Leon (Dana) of New Orleans, LA, Dessia Stokes of Menifee, CA, Schwanda Hill-George (Kevin) of Baton Rouge, LA, Tiesha Hill Williams (Larry) of Haughton, LA, Jacquline Rice (Cortez) of San Antonio, TX, Winston Hill Jr and Crystal Gloss of New York, NY, Brandon Hill of Lithonia, GA. He had 19 beautiful Grandchildren, 12 Great-Grandchildren and his faithful and loyal companion Bentley – “The Dog”. The Hill Family would like to express their sincere appreciation for the sympathy, comforting words, prayers and all expressions of kindness and concern during this difficult time. A very special thanks to Emory Hospital Oncology Department, Surgical Staff, ICU Team, Palliative Care and all the support staff that showed so much love, support, and guidance during this difficult transition. A warm, heartfelt thanks to Mrs. Kuki Iye, his Oncology Nurse who will forever have a special imprint in our heart for the love, compassion and care she gave Winston. Celebration of Life Services for Winston Hill, Sr. will be held on Thursday, May 19, 2022 at 9:30AM. These services will be recorded and streamed live. In the event the service is interrupted at any time due to technical issues, the entire service will be uploaded and available to view later in the day. Please copy and paste the link to share, or simply click on the link to view the services. https://vimeo.com/event/1059682 Service entrusted to Gregory B. Levett & Sons Funeral Home; Lawrenceville 770.338.5558

Winston Lee Hill was born on August 21, 1951, to the union of Edmond and Inez Hill in Crowley, Louisiana. He departed this life on Thursday, May 12, 2022, at the Atlanta VA Medical Center in Decatur, GA. He was preceded in death by his parents... View Obituary & Service Information

The family of Winston Lee Hill, Sr. created this Life Tributes page to make it easy to share your memories.