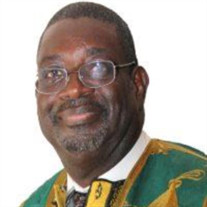 Bishop Dr. William BGK Harris was the Founder & Senior Bishop of the interdenominational and multinational International Christian Fellowship Ministries, Inc. (ICF). ICF, established in 1986, located in Southeast Atlanta, it sits on 4 acres of land that he purchased. He was ordained during the East Ohio Conference of the United Methodist Church in 1984 by the late Bishop James S. Thomas. Bishop Dr. William BGK Harris received a Diploma in Electronics from Booker Washington Institute, Kakata, Liberia, in 1973. He later obtained a Bachelor of Science in Electrical Engineering from Tuskegee, University in 1981. When called to the ministry, he attended the seminary and earned a Masters of Divinity from Gammon Theological Seminary at ITC, Atlanta, Georgia, in 1987. In his earlier career, predating the ministry, he worked for GEC Marconi Avionics as an Electrical Engineer in Quality Assurance, Reliability, and Logistic Engineering for 19 years. In 2010, he earned a certificate in Leadership from the Satcher Leadership Institute/Morehouse School of Medicine Leadership Program. He also earned a certificate in Diversity Management from the American Diversity Institute in 2011. Later, he earned his Doctor of Ministry from the Adamsville Theological Seminary in 2012. For three years, Bishop Dr. William BGK Harris served as adjunct/part-time professor at Beulah Heights Bible College in Atlanta, GA. He has extensive experience writing grants and receiving funding for multiple church projects. He is very active in the local, national, and global Liberian community, serves on several boards, and is an active member of many organizations. The author of more than twelve books (cultural & devotional); some of their titles include Spiritual Scoops Devotionals I & II; Harris Family Legacies Documentary – A Family History; West African Traditional Gospel Documentary – Book/DVD/CD Combo, A Health Resource Guide for West African Immigrants and African-Americans, and My Kidney Story and Journey (2012). Bishop Dr. Harris hailed from Liberia, West Africa, and is survived by his loving and devoted wife, Queeta Tolbert-Harris for more than 30 years, and together they were blessed with seven children and grandchildren. Not only was he the spiritual leader and a pillar in the community, but he was also a father, friend, brother, mentor, and advisor to many! Arrangements will be announced later by Gregory B. Levett & Sons Funeral Homes & Crematory; Lawrenceville; 770.338.5558

The family of Bishop Dr. William BGK Harris created this Life Tributes page to make it easy to share your memories.

Send flowers to the Harris family.