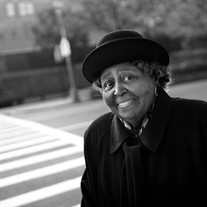 Wilhelmina Jones was called home on January 3, 2022. Ms. Poupie, as she was affectionately called, was born to the late Daniel and Beatrice Simmons on June 13, 1924 in New York City. She was the fourth of ten children. She attended school at St. Marks catholic school and later earned her GED. She met and married the late Curtis Jones on April 21, 1943 and enjoyed 70 years of married life. She was a devoted wife and mother. Poupie and Curtis lived a happy life in Harlem raising their six children. She loved children and worked at the Mary Walton and Hood Memorial Day Care Centers as a teacher’s aid. She was active in the community and with the Church of the Resurrection all her life. She was a very active member of the church choir and the alumni group for many years. She loved to knit and crochet, and over the years made many too big sweaters for family and friends. She was also noted for crocheting baby blankets and bunting sets for the new additions to the family. In her later years she loved working sudoko and word seek puzzles and coloring pictures in a variety of coloring books. During the last four years she lived with her daughters in Ohio and Georgia. She died quickly and unexpectedly in the home of her devoted daughter, Diana Graham, in Atlanta, Georgia. She was a God-fearing, beautiful, loving, generous and vibrant woman who touched everyone she came in contact with. She leaves to cherish her memory: children, Carol Bass of Atlanta, Georgia; Diana Graham (George) of Atlanta, Georgia; Linda Dixon (Gary) of Cincinnati, Ohio; Curtis Jones, of New York; Anthony Jones (Ronnie) of New York; and Susan Jones of Tampa, Florida; grandchildren: Derrick, Lisa, Dawn, Kim, Nate, Roxie, Jeneen, Monica, Monique, Chandra and Sydney; 18 great-grands; 3 great-great grands; sister: Vivian Gregory (Curtis) of New York; brother: Eugene Simmons of New York; sister-in-law: Rosetta Simmons of Georgia; favorite nieces: Brenda Wilkins of Anderson, South Carolina and Andrea Headley(Kenneth) of Orangeburg, South Carolina; and a host of loving relatives, family, neighbors and friends. We will miss her greatly and loved her deeply, but God loved her best.

Wilhelmina Jones was called home on January 3, 2022. Ms. Poupie, as she was affectionately called, was born to the late Daniel and Beatrice Simmons on June 13, 1924 in New York City. She was the fourth of ten children. She attended school at... View Obituary & Service Information

The family of Wilhelmina Jones created this Life Tributes page to make it easy to share your memories.

Send flowers to the Jones family.