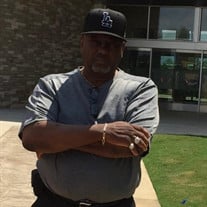 Walter Lee Robinson (affectionately known as “Sweet Man” and “Pee Wee”) was a caring husband, father, grandfather, brother, uncle, and friend. He departed this life on February 13, 2022 at age 73. He was preceded in death by his parents, Mac Watson and Mary Eliza Robinson; sisters, Deloris White and Tommie Jean Scott; and brothers, Arthur Hill, Willie Mac Hill, and Henry Scott. He was born on January 19, 1949 in St. Clair, Alabama, where he joined the Morning Star Baptist Church at an early age. Later, he relocated to Atlanta, Georgia to live with his brother and sister. He took great pride in his military career. He served in the U.S. Navy as a Ship Serviceman (E-3) from January 15, 1971 to December 9, 1972 during the Vietnam War and was honorably discharged after completing his two-year commitment. As a veteran, he continued to serve by joining a veterans support group where he routinely met with other veterans who quickly became his brothers in arms. He retired from the state of Georgia in March of 1998 after working at the Georgia Mental Health Institute for 26 years in the Engineering Department. In retirement, you could find him fishing with his son and friends, and taking road trips with his wife, which included their shared hobby of visiting casinos. Walter had a story for everything and loved to share his tales with anyone within earshot. He never met a stranger and he was always willing to lend a hand. And, if it was broken, he could fix it! He loved working on projects whether it was the kitchen sink, lawnmower, or the engine in his ’84 Cutlass. He will be remembered for his selfless devotion, dedication, and love for his family and friends. He leaves to cherish his memory, devoted wife of forty-one years, Alice J. Robinson; two loving sons, Percy (Karen) Robinson and Walter D’Andre Robinson; grandchildren Kai Gregory Robinson, and Kameron Williams; one great granddaughter, Ariya Chanel Lee; sister, Bessie Robinson; aunt, Helen Edwards; sisters-in-law, Jacqueline Holmes, Melodie Jordan, and Bertha Scott; brothers-in-law, Jeff White, Larry Holmes, and Melvin Jones; and a host of well-loved nieces, nephews, relatives, and friends. https://vimeo.com/event/1763492

The family of Walter L. Robinson created this Life Tributes page to make it easy to share your memories.

Send flowers to the Robinson family.