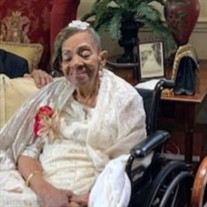 Violet Isabelle was born November 7, 1924 in New Amsterdam, Berbice, Guyana. Violet was the second eldest daughter born to Leopold Augustus and Dana Beldora Rohlehr (nee Alonzo). Violet attended Berbice High School and upon completion she got her first job as a sales clerk at Bata Shoe Store. Violet went on to become a nursing assistant at New Amsterdam Hospital where she helped to care for patients. In 1960, Violet married the love of her life, Wilfred Edward Wintz. The couple was blessed with three daughters, Jennifer, Peta and Olivia. Violet committed herself whole-heartedly to her role as wife and mother, raising her three daughters. In 1971, Violet and her family emigrated to Toronto, Canada, where they lived for several years before moving to Montreal. With her children growing older, Violet again turned her attention to work. In Montreal, she became an entrepreneur and owned her own nursing care business which she ran successfully for many years. Her interests included cooking, gardening, crochet, knitting and going on cruises. Some of her travels included London, Paris, Luxembourg, Amsterdam, Brussels and Acapulco. In 1984, Violet and family again emigrated, this time to New York City. She returned to her career as a Nurses Aid where she lovingly took care of those in need. The Wintz family reunited together again in Stone Mountain, Georgia where Violet spent the last decades of her life surrounded by an abundant household filled with her children and grandchildren. A woman of few words, Violet led her family as the matriarch through a soft but deliberate nature. She was a woman of strong faith and dedicated her life to Christ and accepted him as her savior. She is survived by her loving and devoted husband of 61 years, Wilfred Edward Wintz. Her character left an indelible mark on her family and Violet’s unwavering spirit is carried on through her children, Jennifer Jennings, Peta Parkinson and Olivia Wilson, her son-in-laws Lawrence Jennings, Andrew Parkinson, and Bryon Wilson. She leaves to cherish her grandchildren Adrienne Knight, Arielle Knight, LC Jennings, Brandon Parkinson, Elizabeth Parkinson (Wife to Brandon), Gillian Parkinson, Moradeyo Bandele, Ayodeji Bandele, Aina Bandele and Malik Wilson and a host of nieces, nephews, relatives and friends. In addition, she is survived by her three sisters, Sheila Owens, Leila Telford and Lynette Ifill. She was preceded in death by her siblings, Claville Lee, Shirley Wilson-Fish, June Rohlehr, Stanley Rohlehr and Gordon Rohlehr. On the 5th of October, 2021, Violet was called home by her Lord and Saviour. Violet has left a legacy behind. May she rest in everlasting peace.

The family of Violet Isabelle Wintz created this Life Tributes page to make it easy to share your memories.

Send flowers to the Wintz family.