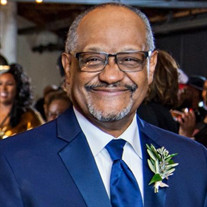 Vernon D. Humphrey’s life was a testament to God. Vernon served as a leader in his personal life and his professional life not as the man in charge and above others, but as a lighthouse of faith and safe harbor for those around him. A true servant leader. Vernon will be remembered for the way he modeled faith, love, kindness, and generosity in all aspects of his life. Born on December 10, 1953 to the late Theophilus Humphrey and Lula Mae Dunaway Humphrey in Augusta, Georgia, he was the second eldest of 10 and the first son for the couple. As the first-born son, leading came natural to Vernon and with the passing of his father, he was called upon earlier than most in life to help guide the family. It was a calling he answered without hesitation and would continue to answer as his business grew. Vernon frequently employed and mentored family. Leading with love, Vernon knew the value of supporting and nurturing his roots. Many men feel called to lead, but Vernon’s principles and faith are what would throw him into sharp relief against his peers throughout the years. When Vernon was 3 years old, the Humphrey family moved from Augusta, Georgia to East Orange, New Jersey. There he attended Stockton Elementary and East Orange High School, where he became a well-known figure on and off the basketball court. On the court, he developed confidence and honed leadership skills as captain of the basketball team. Off the court, he was hard to miss. A dapper dresser from a tender age, Vernon’s style underscored what would become the marker of his presence for years to come; he was a man apart from the crowd. It’s no coincidence, then, that in these formative years, Vernon started his first business - sweeping the floors at Kings Food Markets and working side-by-side with his father. Ambitious and determined, Vernon already had an extraordinary work ethic and entrepreneurial skills. Shortly after completing high school, Vernon and his family relocated back to Georgia in 1972. He’d spend his next chapter working in a warehouse establishment introduced to him by his Aunt Betty and Uncle Hubert Dunaway. This early career move would lay the foundation for a long and successful career alongside his (then future) wife and business partner, Rachael. With his partner in life and in business firmly by his side, Vernon would go on to establish Metro Courier Corporation where their efforts, in partnership with UPS during the 1996 Olympic Games, would earn the company the U.S. Department of Commerce’s Service Firm of the Year Award. More recently, Vernon served as Vice President of MRM Resources proving instrumental in setting the company’s successful growth and diversification into several new areas for the managed services firm. More profound than their entrepreneurial success together, Vernon and Rachael’s commitment to each other serves as a model for others to emulate. Vernon and Rachael met in Atlanta, Georgia in 1979. Rachael worked in finance while Vernon’s entrepreneurial career was in its infant stages. It was clear from the beginning that this was a love not only built on attraction but on mutual respect and understanding, friendship, and a strong desire to serve. They’d support each other, guide each other, and keep each other’s faith through happiness and heartache for over forty-one years of marriage. Forty-one years that brought them joy and success, none greater than their two children, Carl Demetrius Humphrey and Giana Marie Humphrey Gease. Vernon’s family remained his top priority from the day of vows to his last breath. The true definition of provider and protector, he established himself as a successful entrepreneur, supported his children’s hopes and dreams, and led his community through undeterred faith in God. When Rachael was diagnosed with MS in 1996, Vernon dutifully, and without complaint, added caregiver to the long list of roles he fulfilled. He partnered with his wife in her career and in her care. Known to most as Pop V and Sweetz rather than Vernon and Rachael, they experienced life’s blessings together perhaps none more joyous than the blessings of grandchildren. Seeing life through the eyes of their first grandchild, Murphy Vernon Collymore Humphrey, and anxiously awaiting the birth of their second grandchild due in January of 2022, the only thing sweeter than experiencing life’s joys together was experiencing them a second time through grandchildren. Vernon’s life left an indelible mark on all those who knew him. A life lived to please God, his generosity and kindness extended beyond his immediate family. Vernon was a role model to so many young men and a source of support for those in his life. He’ll be remembered and revered as a model entrepreneur, family man, and a true servant of our Lord. Vernon lived each day with intention and purpose. May his memory remind all who knew him to do the same. He leaves to cherish his memory, his wife Rachael Humphrey; his children, Carl Humphrey and Giana Humphrey Gease; his son-in-law, Sherod Gease; his grandchild, Murphy Humphrey; his siblings, Deborah J. Dunaway, Maurice D. Humphrey (Lisa), Theophilus Hassan (preceded in death), Muhsin Hassan (Ernestine), Theodora D. Atwater, Karl T. Humphrey (Shelia), Lisa E. Humphrey, Buatra (Kenneth) Humphrey, and LeeAnn Humphrey-Teague; his sister-in-law, Rev. Dr. Marie Murphy Phillips Braxton (Ronald); his brother-in-law, Benjamin Murphy Phillips IV (Felicia); his nieces, nephews and a host of other relatives, friends and colleagues. https://vimeo.com/623578512

Vernon D. Humphrey&#8217;s life was a testament to God. Vernon served as a leader in his personal life and his professional life not as the man in charge and above others, but as a lighthouse of faith and safe harbor for those around him. A... View Obituary & Service Information

The family of Mr. Vernon Humphrey created this Life Tributes page to make it easy to share your memories.

Send flowers to the Humphrey family.