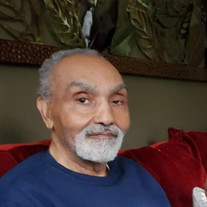 Tom Shaw September 23, 1935 – February 1, 2022 In accordance with His Plan, our Heavenly Father lovingly called his good and faithful servant home, after sharing his earthly presence with us for 86 years. A cherished husband, father, stepfather, brother, father-in law, grandfather, great-grandfather, and uncle completed his life’s journey on February 1, 2022. On September 23, 1935, in Cool Springs, North Carolina, Tom Shaw and Mary Williams Shaw welcomed a baby boy whom they fondly name Tom after his father. Tom grew up in Laurinburg, North Carolina, where he went to school and worked with his family on the farm, his dad was a sharecropper. Tom left Laurinburg, North Carolina as a young man to relocate with his aunt in, Brooklyn, New York, he worked and took evening classes to further his education. Always striving to better himself. On November 2, 1954, Tom followed his dreams of wanting to travel the world and to become a Sailor, he enlisted in the United States Navy. Tom was a Navy fireman, Quarter Master and the ships Navigator while stationed on board the USS Randolph, he separated from the Navy on September 2, 1958. Tom worked as a New York City, Bus Driver for several years before pursuing a career with the New York City, Subway System, where he worked as a Motorman and Train Dispatcher Supervisor before his retirement in May of 1987. TOM THE FAMILY MAN Tom who was affectionately called “Popi” or “Grand-pa” by his grands and great-grands. He was a loving, caring father and grand- father, he also, helped raise his two stepchildren as if they were his own, always wanting the best for them all. He was a great role model and great provider to his family. TOM THE HUSBAND On July 4th1974, Tom met Linda it was definitely a match made in heaven, they fell in love while sharing a beautiful journey of life together, they blessed their relationship with Holy Matrimony on December 28, 1985. From this union they have one son Tomar. TOM THE PERSON Tom’s unwavering faith in the Lord constantly sustained him. He was a pillar of love and courage to his family, he will be remembered by all as a quiet, exceedingly kind soul, who always put God first. We are grateful that God shared him with all who had the pleasure of knowing and loving Tom. He leaves to cherish his loving memory, his loving and devoted wife, Linda of 36 years. Son, Tomar, daughters, Carmen, Lorraine, Debora, Torre, Stepson, Dwight, and Stepdaughter, Sherrise, brother, Able, sister, Rozena. Son-in-law, Daniel. Grandchildren, Nefertiti, Erica, Chris, Tonique, “DJ”, Danielle, Kayla, Tamya, Madison, Makayla, Gabriella, Dominic, and Olivia. Great Grands, Sincere, Athena, “TJ”, Taniyah, and Titus. And a host of nieces and nephews. Tom was predeceased in death by his mother, Mary Williams Shaw, father Tom Shaw, and son, Tommy “jr.” brothers, James Allen, Evans, and Henry. Sisters, Laura, and Hattie.

Tom Shaw September 23, 1935 &#8211; February 1, 2022 In accordance with His Plan, our Heavenly Father lovingly called his good and faithful servant home, after sharing his earthly presence with us for 86 years. A cherished husband, father,... View Obituary & Service Information

The family of Tom Shaw created this Life Tributes page to make it easy to share your memories.

Send flowers to the Shaw family.