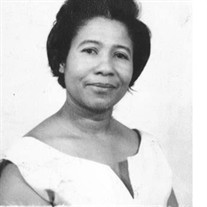 Sylvia Jackson was born on February 24th, 1922, in Clarendon, Jamaica. This year she had the privilege of celebrating her 100th birthday! She was the first child of 10 children of James and Sylvestine Gayle. Sylvia became a nurse in Kingston, Jamaica, specializing in midwifery. Dedicated and highly respected in her field, she served as the head nurse at the medical clinic in Frankfield, Clarendon and later at the clinic in Crooked River, Clarendon. Later, Sylvia migrated to London, England with her two sons Kelvin (Bunny) and Earl. While in London, she studied to become a Senior District Nurse where she and her graduating class were invited to have lunch with the Queen’s mother at the gardens in Buckingham Palace. Sylvia was also a dedicated wife to her late husband George Jackson and supported him in becoming the first Caribbean man to own and operate a gas station in England. At the end of her nursing career, she gave birth to a baby girl, Lorraine. After many years of running their business and raising their children successfully, Sylvia and George retired to Jamaica in 1981. They were members of the Mearnsville Methodist Church in Westmoreland, J.A. and supporters of the local and international community. Among her many interests, Sylvia loved to cook, host parties and was an avid traveler. Eventually, she moved to Atlanta to spend her final years with her daughter and family. Sylvia leaves behind, her daughter Lorraine and son-in-law Brian, her sons Bunny and Earl and their wives, her grandchildren Sonia, Jason, Fiona, Gillian, Richard, Stephen, Natalie and Aaron, 7 great grandchildren, and one great, great grandson who will cherries her memories. Sylvia is survived by her bothers Luther, Walsingham and Alvin Gayle; and sisters Eliz Atkins and Veta Gayle. She also leaves behind many family members including nieces, nephews, and countless friends. We will miss her dearly. May her soul rest in peace. Amen Service entrusted to Gregory B. Levett & Sons Funeral Homes & Crematory; Lawrenceville 770.338.5558

Sylvia Jackson was born on February 24th, 1922, in Clarendon, Jamaica. This year she had the privilege of celebrating her 100th birthday! She was the first child of 10 children of James and Sylvestine Gayle. Sylvia became a nurse in Kingston,... View Obituary & Service Information

The family of Sylvia Jackson created this Life Tributes page to make it easy to share your memories.

Send flowers to the Jackson family.