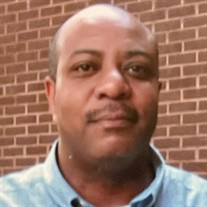 Mr. Stephen J. Morgan, Sr. was born June 8, 1968 in Birmingham, Alabama to Mrs. Helen Patmon Morgan and the late Mr. Otis W. Morgan. The family moved to Detroit, Michigan shortly thereafter where Stephen attended Hampton Elementary and Hampton Middle School. He began high school at Redford High School and later transferred to S.D. Lee High school in Columbus, MS when the family relocated in 1984. Stephen graduated from S.D. Lee High School in Columbus, MS in 1986. He attended Stillman College and the University of Alabama at Birmingham, before joining the U.S. Army in 1989. While in the Army, in 1990, he completed training for certification as a Radiology Specialist at Fort Sam Houston Army Base in San Antonio, Texas. While there he was also awarded the U.S. Army Service Ribbon, M-16 Sharpshooter Badge and the Hand Grenade Marksman Badge. After an honorable discharge from the Army, he returned to Mississippi. He worked at Columbus Medical Center in Columbus, MS as an X-ray Technician and in 1994 he graduated from East Mississippi Community College, with certification as a Licensed Practical Nurse(LPN). He later relocated to the Atlanta, Georgia area and worked at Grady Memorial Hospital as an X-ray Technician. He soon returned to his beloved North Carolina, settling in the Raleigh/Durham area. He served in the U.S. Army Reserves at Fort Bragg in Fayetteville, NC, as a X-Ray Technician. In 2003, after working at various hospitals, senior living and memory care facilities in the Raleigh/Durham area, he began work at Raleigh Orthopedic Clinic and remained there until 2008. In 2008 he began his career as a Medical Review Analyst at Blue Cross Blue Shield of North Carolina (BCBSNC). He remained at BCNSNC for 10 years until ongoing medical issues forced him to resign and relocate back to the Atlanta area in 2018. He is preceded in death by his father, the late Mr. Otis W. Morgan. Stephen leaves to cherish his memory, two beloved sons - Stephen Jonathan Morgan,II and Justin Christopher Morgan both of Durham, NC; his mother- Mrs. Helen Patmon Morgan of Columbus, MS/Loganville, GA; one brother - Richard Wesley Morgan (Sharon) of Columbus, MS; one sister - Stephanie Elaine Morgan of Loganville, GA; one niece - Courtney K. Sanders (Desmond) of Columbus, MS; one nephew - Benjamin Christopher Morgan of Prarieville, LA and a host of aunts, uncles, cousins, extended family and friends. Service entrusted to Gregory B. Levett & Sons Funeral Homes & Crematory; Lawrenceville; 770.338.5558

The family of Stephen Morgan created this Life Tributes page to make it easy to share your memories.

Send flowers to the Morgan family.