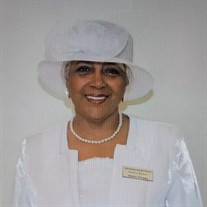 Shirley Louise Thomas was born on August 29, 1942 in Alton, Illinois. She departed this life at the age of 79 after a battle with ALS on December 29, 2021 in Duluth at her daughter’s home. Shirley was the daughter of the late Dorothy and Shaughneysy Small. Shirley received her education in the Alton school system. She began her career as a beautician and retired at the age of 40. She later worked as a Team Leader, Independent Living Counselor and Caregiver before her final retirement in 2011. Shirley loved the Lord and accepted Christ at an early age. She was devoted to encouraging and uplifting others. She was an active member of the FBC Mother’s Ministry since 2012. Shirley specialized in the gift of writing. Regardless of what was already printed in the card, Shirley always filled both pages with kind words of encouragement and scriptures. Shirley leaves to cherish her memories three children, Kevin Frye, Jr. (Ronza), Regina Denson (Reggie), and Michelle Walkup (Junie), seven grandchildren, Jason Holman, Stephanie Smith, Sherrie and Joey Frye, Brittany and Corey Denson, Briana Woolford, and 3 great grandchildren. In addition, her new best friend “Blue”, the Denson family dog, is mourning her loss. Shirley was preceded in death by her parents and 2 brothers, Shaughneysy and William Small. She is survived by one brother Eugene Small (Shirley) – Owasso, OK; and her sisters, Alice Burnes – Buford, GA, Janet Williams (Ike), Rosemary Ransom (Terry) – Springfield, IL, and Jeanette Smith – Orlando, FL.

Shirley Louise Thomas was born on August 29, 1942 in Alton, Illinois. She departed this life at the age of 79 after a battle with ALS on December 29, 2021 in Duluth at her daughter&#8217;s home. Shirley was the daughter of the late Dorothy and... View Obituary & Service Information

The family of Shirley Louise Thomas created this Life Tributes page to make it easy to share your memories.