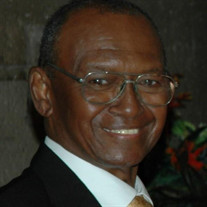 Life Story Rem (Larry) Moss was born December 22, 1935 to the late LB and Amelia Auston Moss in Lincolnton, Georgia. He was the 2nd of 8 children; five brothers and two sisters. Rem attended Smith Chapel School House. He moved to Charlotte, North Carolina in 1949 at the age of 14 after the passing of his mother on August 30th of that year. In July of 1951 at the age of 16, he moved to Philadelphia, Pennsylvania to live with his Aunt Lilly, Uncle Bill, Aunt Earleen (Honey) and her husband Uncle Harry. He later moved to the Germantown section of Philadelphia to live with Uncle Harry and Aunt Earleen. And then moved into an apartment with Aunt Annie and Cousin Dean. Rem also lived with Cousin Irvin, Aunt Annie, and Jim Bell for a period of time. Marriage/Family life: In 1954 Rem met Florence Boyd, who named him “Larry”. After five years of dating, they were married on September 26, 1959. They acquired a home in Southwest Philadelphia, where they raised three children, Sherree, Sherwin, and Sherman, who were God’s blessing through their union. Rem, who understood the importance of education, made sure his children excelled in all their studies, what he called “book work”. Rem valued family very much, and on many Sunday afternoons he and his family would visit with Aunts and Uncles in the Philadelphia area. They often drove to LaCrosse, Virginia to visit with his father-in-law, brother and sisters-in-laws or would travel further South to Charlotte, North Carolina, Augusta, Georgia and Lincolnton, Georgia to visit with his siblings and other family. After selling their home of 48 years, Rem and Florence relocated to Fredericksburg Virginia, then Morristown, New Jersey and finally settled in Suwanee, Georgia in July of 2017, where they spent their golden years living with their daughter, Sherree. Work/Trade: Rem loved to work with his hands and became an expert painter with instruction and tutelage from Uncle Harry and Mr. Leo. He worked in several auto body shops in and around the Philadelphia area but for most of his career he worked at Hank’s Auto Body in South Philly. In addition to working at auto body shops, Rem was an entrepreneur. He professionally spray-painted in-home kitchen cabinets and refrigerators. His family helped with his business. Sherree was the secretary and, Sherman and Sherwin sometimes helped with the painting. His children learned not only the importance of an education but also the importance of a good work ethic. Due to a mild stroke which limited his peripheral vision, Rem eventually retired after 20 years of doing what he loved and did so well. Hobbies: Rem had several hobbies that included bowling, playing pinochle, fixing clocks, and putting together puzzles. Puzzles were one of his favorite past times, mainly because it became a family endeavor. His children, grandchildren, and great-grands would spend hours sitting with him putting together difficult and at times extremely elaborate puzzles. Once the puzzles were completed, he meticulously matted and framed the masterpieces and put them on display for all to view and admire. The last puzzle that Rem put together with his family was an elaborate owl puzzle for a family friend. It took approximately a month to complete with family and friends working on it all hours of the day and night. He was so proud and honored when he was asked to put the last piece of puzzle in place. That was a special moment. Rem leaves with fond memories, three children Sherree Moss, Suwanee, GA, Sherwin Moss, Ridgefield Park, NJ and Sherman Moss Honolulu, Hawaii; two daughters-in-law Donna Moss and Taryn Moss; six grandchildren, Stephon, David Jr., Monique, Angelica, Sean and Daniel; six great-grandchildren, Shoron, Daniel, Lily, Carleea, David III, and Naomi; one sister, Lucille Green, and one brother, Jesse Moss (Rosetta), a host of nieces, nephews, extended family members and numerous people who were touched by his love, kindness and generosity. Rem Moss' service will be recorded and streamed live. In the event the service is interrupted at any time due to technical issues, the entire service will be uploaded and available to view by the next business day. Please copy and paste the link to share, or simply click on the link to view the service. https://vimeo.com/GregoryBLevett Service entrusted to Gregory B. Levett & Sons Funeral Homes & Crematory; Lawrenceville-770.338.5558

The family of Rem Moss created this Life Tributes page to make it easy to share your memories.

Send flowers to the Moss family.