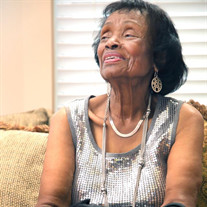 What is a “diva?” The Merriam-Webster dictionary defines a “diva” as “a usually glamorous and successful female performer or personality.” To know Odessa Bussey Spraggs was to know the last of the true divas. Her consistent poise and style always checked the “glamourous” box, and the personal and professional fulfillment she earned satisfies the “successful” category. While she never put on a performance (absent a margarita or two), to be part of her life was to sit in on a spectacular show – a show of pure, unadulterated enjoyment of the good this earthly life has to offer. Odessa first graced the world with her presence on August 17, 1925. She was born in Winston-Salem, NC to parents Frederick and Rachel Walton Bussey. The fourth of eight children, Odessa grew up and remained close to her six sisters and one brother. Throughout her life, Odessa deeply valued her family and she would collect “family” (biological or not) through the life she led. She and her siblings grew up in Sheepshead Bay, Brooklyn, NY and attended PS 206. Later, Odessa attended Manhattan Trade School for girls, where she garnered a love for fashion design. Powerful women empower other women, and Odessa empowered women through a successful career in the fashion industry. A renowned seamstress and designer, Odessa worked as the lead dressmaker at Lucille Rivers dress shop in Lower Manhattan. During her tenure, she had many clients of notoriety, including Barbara Walters and Donna Reed. Her clothes were even showcased in the 1964 World Fair. Never forgetting the little ones, Odessa even made girls dresses with matching stuffed elephants. For many years, Odessa ran a dress shop from her home in St. Albans, Queens. She had several private customers and was featured in magazines and newspapers. Odessa regularly traveled to Manhattan to fit models for several pattern companies: Vogue, Simplicity, and Butterick – to name a few. She also had several private clients, for whom she made everyday clothing and special event attire. During the 1970s, she branched out and worked for Scovil Company, where she helped design patterns for clients. In 1978, Odessa opened a dress shop at 527 Madison Avenue. Now, a diva never needs a man, but a true diva is successfully complemented by a man who lets her shine. In 1956, Odessa married the love of her life, Clem Spraggs. She brought the spark and spunk, and he was the cool and steady hand. She always had a lot to say, he always had less to say, and together, their marriage had the most to say: a shared life of respect, loyalty, and love. The fruit of their legacy is their daughter and Odessa’s best friend, Joyce Cynthia Spraggs. After Odessa’s retirement, she and Clem moved to Atlanta, GA in 1985, to be closer to Joyce. Ever the socialite, Odessa was a treasured member of several social clubs: “The Gay Seven” and “Pretty People’s Club,” as well as “The Jack & Jill Club” during her daughter’s youth. Always giving back, Odessa frequently volunteered at elementary schools where her daughter worked. Divas don’t ask for permission, and neither did Odessa. She used to sneak into the YMCA wearing a cap so that she could “exercise” (not just swim). Never one to mince words, she spoke the truth with a confidence we could probably all benefit from. Odessa’s passing leaves a diamond-shaped hole in the hearts of those who loved her, which includes her daughter, Joyce Spraggs, sisters Fredericka Nelson and Elaine Bussey, nieces Debra Edwards, Patricia Weston (Richard), Loren Brereton (Michael), nephew Fredrick Bussey (Twyler), beloved friends Ebele Noxolo Oseye, Marlene Pannell, Lorna Gallimore, Tracy Pannell, Gillian Lewis (Christopher), Annette Slidge (Norman), Karen Farrelly (John), Gloria Scott, and a long list of great nieces, great nephews, and devoted friends. What does a diva leave behind? A diva leaves a little sparkle behind wherever she goes. Her light, her laugh, her wit, and her love continue to dazzle us and will sparkle on in our hearts long after she passes. We thank God for sparkling our lives with her presence, and we take comfort in knowing that she’s resting with the Ultimate Designer in His Kingdom.

The family of Odessa Spraggs created this Life Tributes page to make it easy to share your memories.

What is a “diva?” The Merriam-Webster dictionary defines a “diva”...

Send flowers to the Spraggs family.