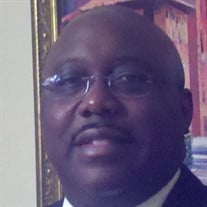 Norman Mitchell Jefferson Sunrise: September 3, 1964 Sunset: February 21, 2022 Norman Mitchell Jefferson was the third child and second son of Rev. Dr. Frederick Douglass Jefferson and Ruby Jefferson, RN. His nickname on the playground was “Stormin Norman”. Norman weathered many life storms with great faith until the Lord called him home. He passed away peacefully on February 21, 2022. Norman was a graduate of Brighton High School in Brighton, NY, and the Culinary Institute of America (CIA) in Hyde Park, NY. He entered the CIA at age 19, at the time one of the youngest ever admitted to the institute. Cooking was Norman’s passion. He was known for superbly flavored dishes such as lobster bisque, shrimp salad, and cassis sauce. He saved the day with his creations at many functions. He started cooking as a child. He submitted his own recipe for chicken divan for the Council Rock elementary school cookbook. In high school, he started cooking at Mario’s Italian Restaurant in Rochester, NY. After graduating from the Culinary Institute of America, he worked at Levana, Sparks Steak House, and Le Bernardin in Manhattan. He went to work as a sous chef at the Jacob K. Javits Convention center before being transferred and promoted to head chef at the Walter E. Washington Convention Center in Washington, DC, and then transferred to the head chef position at the Baltimore Convention Center. Burnout led to a career pivot to work in sales for Sysco. He missed cooking so went back to work as a chef at the Marriot Hotel in College Park, MD, and National Geographic headquarters. Norman and Sheila decided to relocate to the Atlanta area in 2007. Norman earned President’s Club award for outstanding sales in 2009 with Verizon Wireless. Health issues caused him to choose a flexible work schedule. He worked as an Uber and Lyft driver where he was awarded and recognized for outstanding customer service. Norman was a man of faith. He loved life and never knew a stranger. He was truly kind. Norman is survived by his wife Sheila Marie Jefferson; his stepsons Roosevelt Davis and Kenneth Reynolds; his sister Janie Jefferson Nneji and her husband Ben, his brother Fred Jefferson and his wife Felicia; nieces/nephews: Nkechi Nneji, Obi Nneji, Amaka Atinmo, Oby Grace Nneji, Jacqueline Jefferson, John Jefferson; Cousins: Letitia Wims, Leslie Wims Morris, Phyllis Jefferson, Sharrod Jefferson and his wife CaVonna, Arica Jefferson, James Brown; eight grandchildren and other cousins. A private ceremony will be held. Memorial fund contributions are welcome. Please send via Venmo to @Janie-Nneji. Thank you for your prayers and condolence

The family of Mr. Norman Jefferson created this Life Tributes page to make it easy to share your memories.

Send flowers to the Jefferson family.