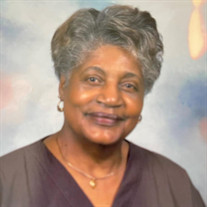 In 1937, on March 26th in Superior, West Virginia, the late John E. Lott Sr. and Edna M. Horton Lott rejoiced on the birth of their first child Norma Jean. Our Lord granted Jean, as most affectionally called her, peace and eternal rest on April 18, 2022. The family migrated to Buffalo, New York in 1946. They continued their long affiliation with the A.M.E. Church in joining Bethel A.M.E. in Buffalo. In 1976 her career with Western Electric transferred her to Omaha, Nebraska where she continued her A.M.E affiliation with Allen Chapel and her last Church home was Bethel A.M.E. In her youth, Norma Jean attended School 41 and Lafayette High School. As a young adult she worked in various jobs to support her young family until she secured her career job with Western Electric/Lucent Technologies of 30+ years until she retired in Omaha. In August 1976, Norma Jean moved to Omaha Nebraska with her two youngest children with an anticipation of a new life. She adjusted and settled in with new friends and adventures. While in Omaha, she continued her education and received her Bachelor’s Degree of Science to further her career. Being a people person, she was affiliated with many organizations. She was an active member of Zeta PHI Beta Sorority for many years which then lead to her next affiliation with the Order of the Eastern Star where she remained active until her health began to fail and she was deemed a honorary member. During her tenure she was elected and reigned as Worthy Matron of Deborah Chapter #17 and continued to serve as an elected official of Amaranthus Grand Chapter of Nebraska as Grand Secretary and Grand Community Correspondent of Foreign Affairs (GCCF). Norma had a zest for life. She travelled often from European excursions with her sisters and close friends to cruises and islands. She was a long time volunteer at Charles Drew Health Center. One of her favorite pass times was the Queen of Hearts Bridge Club. Some of her other hobbies included bowling and golfing. She enjoyed games of chance, and could often be found at the closest bingo hall or Casino. Her love of family and close friends was her strength and if you had the honor of being in her close circle she would give you the clothes off her back if needed. She was kind hearted and stern all at the same time. If you had the pleasure of meeting her you would not forget her. Norma was preceded in death by her late husband Solomon S. Dorsey, her parents John and Edna Lott, sisters, Mary “Gwen”, Edna “Ebbie” Annette and her brothers, Donald “Donnie”, James “Jimmie” and Robert “Bobby” Norma leaves to cherish her memory three children Derrick Dorsey of Buffalo, NY, Tamuel Dorsey (Kathy) of Virginia, and Natalie Sims (Nathaniel) of Georgia. Two brothers, John Lott (Sarah) and Kenneth Lott (Joyce) both of Buffalo, NY. She also leaves a long time friend Nathaniel Thomas of Georgia Norma has 13 grand children, 25 great grand children and 4 great-great grand children. She also leaves a host of nieces, nephews, cousins and close friends who loved and will miss her dearly. Norma Jean Dorsey's service will be recorded and streamed live. In the event the service is interrupted at any time due to technical issues, the entire service will be uploaded and available to view by the next business day. Please copy and paste the link to share, or simply click on the link to view the service. https://vimeo.com/event/1059691 Service entrusted to Gregory B. Levett & Sons Funeral Homes & Crematory - Lawrenceville; 770.338.5558

In 1937, on March 26th in Superior, West Virginia, the late John E. Lott Sr. and Edna M. Horton Lott rejoiced on the birth of their first child Norma Jean. Our Lord granted Jean, as most affectionally called her, peace and eternal rest on April... View Obituary & Service Information

The family of Norma Jean Dorsey created this Life Tributes page to make it easy to share your memories.

Send flowers to the Dorsey family.