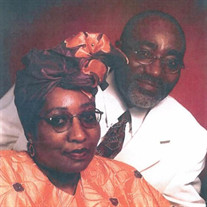 David’s Obituary Adieu and Farewell Adieu and farewell to you both, Brer Sunday & Janet. It seems that you are a couple destined to be together on earth and in your journey unto the horizons beyond. I bid you adieu! Brer Sunday, born on the first day of the week, happens to be the first amongst six other sibling brothers. We all call him brer Sunday. He always reached out and worried when he was unable to get a hold of one of us. He showed us how to grow up, become men with responsibility, to dress fashionably, and love music, especially jazz music. That became his favorite hobby. He became a devoted fan. He was kind and fun to be with especially when in a lighter mood. He had a friendly, humble, and amiable personality. Some might say that he was too open, to a fault. He was fond of his wife and family, especially the grandkids. He spoke about them often and was glad to be very present in their lives as they grow up. He came to the United States for a purpose. Through many ups and downs, by the grace of God, he achieved his academic goals. After he obtained his graduate degree, he worked as a professional microbiologist and retired as a soil scientist and Department manager with the State of Georgia. Brer Sunday and Janet were avowed born-again Christians. Most importantly, they acknowledged that Jesus loves them. They were blessed to receive of God's love in Christ and were saved and sanctified by the Holy Spirit. (Ephesians 1:13) Brer Sunday loved the Lord. Janet loved the Lord. In fact, for a time, they had a home church, a group of believers that worshipped in the basement of their home. That is their lasting legacy. According to our Lord Jesus Christ, "whoever believes in me, although he may die, yet he shall live" (John 11:25, AMP). Our hope rests in Him, our Trust, in the "author and finisher of our faith". Therefore, Apostle Paul encourages us not to mourn for those who are asleep in Christ, as do those without hope (1Thessalonians 4:13). May their souls continue to rest in the peace of our Lord Jesus Christ, Amen. Janet’s Obituary Janet Marie Massey was born on February 16, 1949 in Elizabeth, New Jersey. She was the 3rd child of Tommie Marie Bostic Massey and Arthur Lee Massey. She had three brothers and one sister. Janet grew up in the small, close, and loving neighborhood of 9th avenue in Roselle, New Jersey where she attended Lincoln Elementary and Abraham Clark High School. Immediately after high school, Janet worked for Woodbridge State School, tenderly caring for special needs children as an institutional attendant. She was passionate about ensuring the safety and wellbeing of the children in her care. She was later employed with Union County Anti-Poverty and United Way assisting with various programs that supported the families in need in her community. It was at a co-worker’s wedding that Janet met and soon thereafter married the love of her life, David Sunday Adekunle Orokunle, who stood firmly by her side and supported all of her dreams and endeavors. After moving to Decatur Georgia in 1988 with her family, Janet worked for the State of Georgia where she utilized her excellent office and organizational skills. However, Janet’s passion and overall concern for children led her to open her own business as an in-home day care provider where she cared for many children including a few of her family members. As she continued with her career in childcare, Janet made the decision to not only open her heart but her home to children in the foster care system. She served as a foster parent for a private agency, all the while, providing unconditional love to her own grandchildren. As an adult learner, Janet earned a Bachelor of Science in Education. Professionally, she went full circle and ended her career just as she had begun with Gwinnett County Public Schools as a paraprofessional working with special needs children. Janet was a devout Christian, who served as a Sunday School Teacher for First Baptist Church Atlanta, where she was a member for over ten years. Janet was an avid reader and enjoyed writing poetry. She was also very good with creating graphic designs for children’s Sunday school and various types of celebrations. Those who knew her loved her. She leaves to cherish loving memories, her sons, Al-Wakil Hamid Orokunle, James Oluwayemi Orokunle, daughter, Bolaji Abeke Orokunle, granddaughters Alexandria James, Jaia Jadesola Grant, and grandson, Daniel Jisayo Blakey. Brother, Ronald L. Massey (Trina Daniels Massey) and Sister, Nanette Massey Enabulele (Jaybie Enabulele), several brothers-in-law, sisters-in-law, several aunts, cousins, nieces, and nephews. Janet was truly a sweet spirit; she was our angel here on earth. Our hearts are heavy, and our eyes are tear stained. However, we recognize God’s will shall be done in heaven and earth and death is the only way we can receive the blessing of eternal life. So, in the loss of our loved one, we bow in humble submission to the will of God the giver of every gift and all things perfect. We also find comfort in knowing that even in death, Janet is once again united with David as one. Submitted by The Family Celebration of Life Services for David and Janet Orokunle will be held on Thursday, October 28, 2021 at 12:00PM. These services will be recorded and streamed live. In the event the service is interrupted at any time due to technical issues, the entire service will be uploaded and available to view later in the day. Please copy and paste the link to share, or simply click on the link to view the service. https://vimeo.com/638216588

David&#8217;s Obituary Adieu and Farewell Adieu and farewell to you both, Brer Sunday & Janet. It seems that you are a couple destined to be together on earth and in your journey unto the horizons beyond. I bid you adieu! Brer Sunday, born... View Obituary & Service Information

The family of Mr. and Mrs. David and Janet Orokunle created this Life Tributes page to make it easy to share your memories.

Adieu and Farewell Adieu and farewell to you...

Send flowers to the Orokunle family.