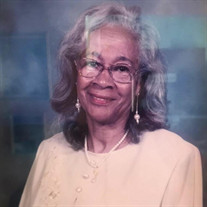 It was Wednesday June 1st, 1932 that our beloved Matriarch Mavis Maud Fox (Watson - Reid) was born to the late Esther Theresa and Ernest George Reid in Kingston, Jamaica West Indies. She was the youngest of seven children who have all preceded her in death. Mavis spent her childhood and went to school in Jamaica. It was July 24th, 1952, that Mavis would marry her childhood sweetheart Herbert George Watson, who was a soldier from the Jamaica Battalion Regimen. Over the years they would produce three children. Being a housewife, she would spend her time caring for her family while slowly mastering her skill in sewing. Her skill improved so much that she became a designer of hats and beautiful dresses. She worked for a major manufacturer in Jamaica, and it was there that she met two women who would continue to be a part of her life’s journey. One was Rita, who later became her sister-in-law and Rhoda Clarke, who now currently resides in Canada. Mavis loved travel and adventure and always strived to excel in everything she thought would benefit herself and family. In 1962, she made her first trip to the U.S. and stayed a few months. After securing that her family needs were stable in Jamaica, she returned to the U.S. a few years later and started a new career which led to the opportunity to prepare for the arrival of her family. She had a loving and kind heart; therefore, it was no surprise when she decided to use her caring hands to comfort children. This choice spanned throughout the rest of her life, beginning in the Pediatric Department at Columbia Presbyterian Hospital in N.Y.C. and Vassar Brothers Medical Center in Poughkeepsie N.Y. This pride and love of taking care of children continued when she moved to Georgia over 35 years ago. She became the family and village nurse, grandma, teacher and everybody’s friend. There was always a buzz of energy, laughter and excitement that followed her wherever she went. She always had an ear to lend to anyone who was broken or just wanted to be heard. Her modest home was home to her children, grandchildren, great grandchildren, extended families, and anyone who just wanted a place to rest. This home matured into an oasis for the needy and deprived. Her kitchen was always inviting with the aroma of everyone’s favourite dish. If you are hungry or sick be assured that Mavis is cooking something healthy and enjoyable for you. Outside, her garden is filled with herbs, fruit, vegetables, and an assortment of beautiful plants. She was blessed with hands to heal and nourish everything she touched. Mavis never missed an opportunity to travel to new and adventurous places; her bag was always ready; from touring Europe with her besties to spontaneously hopping in the car with a loved one to go wherever they were going. With her you can be certain that your journey will be filled with laughter and fun. Famed for her accounting skills and record keeping, Mavis organized and managed the largest partner (susu) in her Lithonia neighbourhood for decades. This allowed financial stability to many, especially to those who had recently migrated to Atlanta. She was sharp, witty and cunning as a fox. She was a devout Christian and a dedicated member of Assembly of God Tabernacle Church in Georgia. She rotated in the Childcare area but would spread her wings wherever she was needed. It is impossible to remark on all the feats this amazing woman possessed. However, some of her qualities remain with the multitude of people whose lives she touched. The biggest testimony of her life was evident, while toward her last lap, the village of people whom she had helped came by to pay tribute and respect to her. Her final days were spent in peace and reflection in the comfort of her home surrounded by family and loved ones. It was Friday Dec 3rd, 2021 that Mavis went home to our Heavenly Father. Loved ones who cleared the path for Mavis are her parents, her siblings: (Joseph, Bertram, Reginald, Beatrice, Alexander, Leonard), family members and lifelong friends. Loved ones who will continue to cherish her memories are her children: Michael Watson (Marcia), Marjorie Joy Reid, Shawn Dawson; grandchildren: Orande Richards, Amare Watson, Seyoum Watson, Meshack Watson, Kamilah Watson, Ayana Wellington, Zahra Haytasingh (Nigel), Najja Wellington (Krystal), Jamel Watson, Asia Baysah (Ansu), Qwaneesha Townsend, Irieana Dawson; 20 great grandchildren, 1 great great grandson and a village of extended families and friends

It was Wednesday June 1st, 1932 that our beloved Matriarch Mavis Maud Fox (Watson - Reid) was born to the late Esther Theresa and Ernest George Reid in Kingston, Jamaica West Indies. She was the youngest of seven children who have all preceded... View Obituary & Service Information

The family of Mavis Maud Fox created this Life Tributes page to make it easy to share your memories.

It was Wednesday June 1st, 1932 that our beloved Matriarch Mavis...

Send flowers to the Fox family.