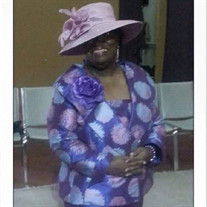 Mattie Mae Stone-Williams passed away peacefully on November 15, 2021 at the age of 72. She was born in Forrest City, AR in 1949 to Willie Earl Stone Sr. and Pairlee Stone. In 1967, she graduated from Edison High School in Gary, IN. Mattie was also an active member of many organizations, including the choir, National Honor Society, National Quill and Scroll, GAA, FTA, and served as President of the Student Council. An award-winning vocalist and community organizer, Mattie won First Place in the Indiana State Vocal Competition at Butler University and received the American Foreign Legion Award. Mattie continued her activism at Dillard University, and was an active member of several organizations including the Dillard University Gospel Gems, Zeta Phi Beta Sorority Inc., Dean’s List, National Music Workshop of America, University Choir, Dillard Player’s Guild, Afro-Americans for Progress, Dashiki Project Theater, Baptist Student Union, and the Student Newspaper Staff. In 1968, she received a key to the City of New Orleans and was made an Honorary Citizen for her work in Community Relations. She earned the distinction of being a Cum Laude graduate in 1971 with a B.A. in Political Science and Government. In addition, she received an M.A. in Educational Administration and Supervision from Loyola University New Orleans in 1975. Mattie served as Director of the Upward Bound Program at Loyola University for 24 years. She was a respected community organizer, and was active in the Gentilly Development Association, Total Community Action, and the New Orleans Recreation Department. Mattie was also a licensed real estate agent with Gertrude Gardner. A beloved educator, community servant, and woman of faith, she served as a minister at Christian Unity Baptist Church in New Orleans and was an Ordained Mother at New Life International Family Church in Decatur, Georgia. Mattie also enjoyed reading, singing, traveling, writing and teaching Sunday School. Mattie was preceded in death by her parents and her sister, Betty Stone. She also leaves to cherish her memory her daughter, Khia Enjoli Harrison (Gustave Micheal) and her grandchildren, Gianna, Jai'Lynn, and Makayla; her brothers, Willie Earl Stone, Jr. (Chevin) and David Lee Stone; her niece and nephews, Caitlin, Jonathan and David Stone Jr.; her former husband, Sam F. Williams III; along with a host of cousins, family friends, co-workers and church family. Relatives and friends are invited to attend the Memorial Service at Christian Unity Baptist Church located at 1700 Conti Street in New Orleans, on Saturday, December 4, 2021 at 10:00 am. In lieu of flowers, the family requests tribute donations be made to the Alzheimer’s Association.

Mattie Mae Stone-Williams passed away peacefully on November 15, 2021 at the age of 72. She was born in Forrest City, AR in 1949 to Willie Earl Stone Sr. and Pairlee Stone. In 1967, she graduated from Edison High School in Gary, IN. Mattie was... View Obituary & Service Information

The family of Mattie Mae Stone-Williams created this Life Tributes page to make it easy to share your memories.

Send flowers to the Stone-Williams family.