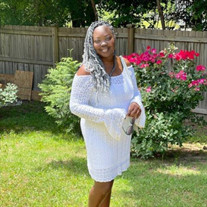 It was a bright and sunny Sunday morning on May 7th, 1978, when a beacon of light – a light so gentle but bright – was born and entrusted by God to the care of Reginald and Hermine Manning of Water Lane, Clarendon, Jamaica. She was named Marsha, by her older sister Marcia. Being the last baby girl (number 12 of 13 children), she was spoiled and pampered by her older siblings. Because there were so many pairs of hands to hold her, she used to cry a lot when she was put to lay or sit down. But even as a young baby, she knew if she cried a little harder or a little longer, another pair of hands would pick her up. So, from an early age, Marsha has had her siblings wrapped around her tiny fingers, and she loved every minute of it. In her adolescent to young adult years, Marsha was best described as being jovial – but in a quiet way; thoughtful – in a reflective way; delightful – in a serene way; and reserved – but never a pushover. As an adult, she would never start a fight with her siblings or anyone else – because she was a peaceful soul – but she would never lose any fights either. She incorporated humor and sarcasm into everything that she did. She had catch-phrases like “you don’t say” or “that’s so sad”. It was hard to take her seriously even in the most serious of situations. There was hardly ever a time when she didn’t have a smile on her face. Marsha attended the Watsonton Primary School and later Kemps Hill High School. During those years, she spent lots of time with her youngest brother Carlington (now deceased); nieces and nephews – Denise, Francine, Shelly, Delono, and Ricky; and friends Nadine and Germaine. When her mom passed away in 1991, Marsha was only 13 years old. One of her eldest sisters, Etta, assumed responsibility of her care at that time. She lived with Etta until she was a young adult, upon which she returned to Water Lane to help her cousin Michelle take care of her nieces and nephew Nickiesha, Jody, and Corey. Even as a young adult, she was a born natural mother figure. She took such good care of her nieces and nephew, which prepared her for the phenomenal mother she became. She migrated to the Virgin Islands and later gave birth to her first-born child, whom she named Tacia. Baby Tacia was Marsha’s sunlight through the rain. She made Marsha a proud and doting mom. Mother and daughter created a beautiful bond that nothing on earth could break. That bond stayed intact until her dying day. While in the Virgin Islands, Marsha met the love of her life, her knight in shining armor, Kerlew Thomas. They dated for three years before getting married in Jamaica on December 31st, 2006. From this union, another 2 beautiful souls were born – Tricia and Tracia – they were the joy of Marsha’s world – as delightful and loving as her. On April 18th, 2008, Marsha gave her life to Christ and became a baptized member of the Purcell Seventh-day Adventist Church. Without a doubt, it can be said that Marsha truly loved the Lord. While attending church, Marsha served in various capacities as a church leader. Those positions included being a deaconess, pathfinder councilor, women’s ministries leader, and AY leader. Marsha’s passions have always been the youth and youth ministry. As an AY leader she inspired the youth of the Purcell Seventh-day Adventist to build relationships with God for themselves and to trust Him with their whole heart. Marsha took part in the Pathfinder Congressorees held on different islands as well as cheered the Advent Heartbeat Drum Corp, which her nephews Kamarie and Kenneskie were a part of. Marsha was a beacon of light to whomever she encountered. Her loving nature and caring personality were hard to miss and was often reflected in her warm and contagiously soft smile. As we mourn the loss of such a phenomenal woman, wife, mother, sister, aunt, friend, coworker, and youth leader, we can rest assured that her life was one that should be celebrated. The light which was her life shines bright within our hearts forever as we lay her to rest today.

It was a bright and sunny Sunday morning on May 7th, 1978, when a beacon of light &#8211; a light so gentle but bright &#8211; was born and entrusted by God to the care of Reginald and Hermine Manning of Water Lane, Clarendon, Jamaica. She... View Obituary & Service Information

The family of Marsha Manning Thomas created this Life Tributes page to make it easy to share your memories.