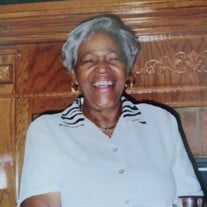 Lillian Cecilia Walton, 97, of Decatur, GA, Passed on Monday, April 18, 2022. Celebration of Life Services will be held on Friday, 04/29/2022 at 10:00 AM at Holy Cross Episcopal Church located at 2005 S Columbia Pl, Decatur, GA 30032. The visitation will be on Thursday 04/28/2022, 12-7:00 PM, followed by a wake from 7:00 PM - 8:00 PM. Due to COVID-19, a mask will be required to enter our building. Please express your condolences here on our website. Services entrusted to Gregory B. Levett & Sons Funeral Home, South DeKalb Chapel located at 4347 Flat Shoals Parkway, GA 30034. 404-241-5656. Family Obituary On June 27, 1924, in New York City, Lionel Charles Caine, a native of the twin Caribbean Islands of St. Kitts and Nevis and Mary Piper born on the Caribbean Island of Montserrat, gave birth to Lillian Cecilia Piper Caine, the second of their three daughters. They raised Lillian, along with her older sister Violet and younger sister Myrtle, in Harlem during the time when it was the center of African American culture and politics. Her father a follower of Marcus Garvey and, a distant relative of Alexander Hamilton, through his Nevis born Hamilton surnamed mother, instilled in her a strong drive to achieve academically and professionally. She received her primary and secondary education in the New York City Catholic School system graduating at the top of her class from St. Charles Catholic School. She then attended and graduated from Cathedral High School which due to its affiliation with St. Patrick’s Cathedral- gave all their graduates the right to be married in that world-renowned church. Lillian subsequently obtained her bachelor’s degree in Mathematics from Hunter College in New York. After a brief time working in social services, she embarked upon a 40-year career as an elementary school math and computer teacher with the New York City Department of Education. A blind date arranged by family friend Irwin Costello on Valentine’s Day February 14, 1954, led to her meeting the love of her life Willie Walton Jr., who at that time had recently relocated from Atlanta, Georgia to New York They married on November 7, 1954, though not at St. Patrick’s Cathedral as he was divorced and not Catholic. To this union were born four children- Gregory, Gilbert, Gail, and Glynis. Lillian provided her husband and children with a happy and loving home filled with an abundance of laughter, family, and friends. Hers was the anchor home through which many of her relatives emigrating from Montserrat and England passed through on their way to establishing lives in the United States. She gave to her children, what her father gave to her- a strong drive to achieve academically. From the time her children were born, she motivated them to achieve by constantly telling them they had to get their college degrees and put them in her hand; and -with her constantly urging and supporting them- they did. Upon her retirement in 1987, Lillian relocated with her husband Willie to his native Georgia where they established a southern continuation of the loving home and lifestyle they had in New York. She was an active member and former Steward of the Episcopal Church of the Holy Cross in Decatur Georgia and was one of the founding members of their Young at Heart senior citizens ministry. After sixty years of marriage, her beloved Willie predeceased her in February 0f 2014. Though heartbroken, she continued in her role as matriarch of her family even as her health declined in recent years. On April 18, 2022, after 97 years on this earth, Lillian Cecilia Walton rejoined her beloved Willie and entered eternal rest with her Lord and Savior Jesus Christ. She leaves behind to cherish her life and memories her four children Gregory Walton, Gilbert Lionel Walton ( Michaelle Apollon), Gail Walton and Glynis Walton Callender(Van Callender); four grandchildren Cameron Walton, Cahlia Walton, Dale Callender (Hyree) and Justine Callender; nieces Patricia King(Dwight King), Renee Cawley( Richard), Jennifer Walton; nephews Anthony Walton and Cyrus Walton (Keisha); grandnieces Ayana Cawley Jacobs( Chad), Kyra King, Maria Christopher and Monica Christopher; grandnephews Kerry King, James Cawley and Nigel Walton; her sister-in law Dr. Harriet Walton and a host of cousins ,and many friends too numerous name.

The family of Lillian CecilIa Walton created this Life Tributes page to make it easy to share your memories.

Send flowers to the Walton family.