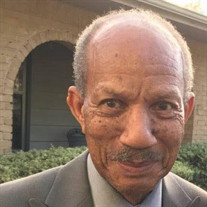 Leonard Sinclair Anderson “Grand” was born on April 10, 1035 in Memphis, Tennessee to the parents of Willie and Ruth Anderson. Leonard was the 4th child of 5 siblings. Herbert Lee, Lorrine Osborne, Willie Anderson, Jr., and Ronald Anderson. Leonard was educated in the Memphis public school system. To this day, he has all of his report cards from kindergarten through high school. Leonard graduated from Arkansas AM&N, (now known as The University of Arkansas at Pine Bluff) in 1957, where he earned his Bachelors’ Degree in Music. He pledged Omega Psi Phi Fraternity, Inc. in 1954. He furthered his education at the Chicago Conservatory of Music, where he earned his Masters’ Degree in 1965 and sang in the Chicago Symphony Orchestra Choir. Leonard served in the United States Army and the Reserves from June 1957 to May 1963, where he served in the Military Band. Leonard worked for the Atlanta Board of Education as a Band Director until he retired. His love for music started when he was a young child and continued until the day he went home to be with our Lord. Leonard considered himself a “Cradle Episcopalian”, meaning he has been a member of the Episcopal faith all of his life. In 1960, Leonard became a member of Saint Paul’s Episcopal in Atlanta, GA. He served faithfully in the Hospitality, Vestry, Usher Board, Choir, Episcopal Church Men’s Club, and Food ministries. In 1978, while at church, Leonard met Agnes Nichols, who soon became the love of his life. They were joined in Holy Matrimony in 1980 and remained happily married for 41 years. On June 15, 2022 at 5:48 pm, Leonard answered the call of our Lord and Savior. During the time of his transition, one of the other residents was in the very next room playing the piano and singing “When the Saints Come Marching In”. We believe this is how the Lord called him home. Leonard responded when his spirit left his earthly body and marched into Heaven where he will spend eternity singing and praising our Heavenly Father. Leonard leaves to cherish his memory: His loving wife Agnes Anderson, Son Gerald (Tamika) Anderson, Son Gregory Nichols, Brother Ronald Anderson, Brothers in-law Andrew (Barbara) White Jr., Larry (Gail) White, and Kenneth (Arrie) White, Sister in-law Edna Stephens, Five Granddaughters -Shannon Parrott, Ceraya Nichols, Jada Anderson, Samanda Nichols, and Victoria Nichols, Grandson Gerald Anderson II, and a host of nieces, nephews, cousins and friends.

The family of Mr. Leonard Sinclair Anderson created this Life Tributes page to make it easy to share your memories.

Send flowers to the Anderson family.