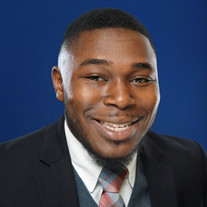 Kristopher George Oneil Johnson, and his surviving twin sister Kristina, were born on June 28, 1994, to their parents, Selwyn and Darlene Morris Johnson. Affectionately known to most as “Kris,” but lovingly called “Cleo” by his twin sister. At an early age, Kris professed his faith in the Lord Jesus Christ. He was always sharing God’s love and would share with everyone, that no matter what you’ve planned for your life, one must always remember that God is always in control of everything. Kris received his education in the Atlanta Metropolitan area. Kris graduated from Chamblee Charter High School in 2012. After graduation, he attended the College of Coastal Georgia in Brunswick. In 2015, he returned home when his father Selwyn became ill with pneumonia to assist his mother. After his father’s recovery, Kris returned to school to complete his educational studies. He received his acceptance to Year Up Atlanta and completed an intensive one-year program in technology. Kris also attended Georgia State University and ultimately graduated from the Atlanta Metropolitan College with a Technology degree. Kris had a desire to own his own business like his father. He began laying the foundation for what would become “Quartz Painting” while living in Austin, which would service commercial and residential customers. He was an avid biker, and he enjoyed exploring trails both in Atlanta and Texas. Kris continued his love for biking when he moved to Austin, and he became a member of the Social Cycling Austin Club. Kris was preceded in death by his father, maternal grandfather, and paternal grandparents. Kristopher exchanged time for eternity at the age of twenty-seven years old on May 9, 2022, in Austin, TX. He leaves to cherish precious memories: his mother, Mrs. Darlene Johnson; maternal grandmother, Mrs. Adell Morris of Thomasville, NC, two sisters, his twin, Kristina Johnson of Stone Mountain, and LaToya Johnson of Dallas, GA; five uncles, Gregory S. (Andreina) Morris of Charlotte, NC, Clifford D. (Brenda) Morris of Thomasville, NC, Vincent ‘’Danny’’ Helwig of the UK, Winston (Audrey) Johnson of Kennesaw, GA, John Harold Johnson of Lenoir, NC; two aunts, Jewell Lynn (James Robert) Beasley of Thomasville, NC, Isis (Aunt Meg) Esposito of Freeport, NY; and a host of nieces, family and friends. Kristopher found love while in Austin, his beloved puppy, “Beejay,” a Black Mouth Cur whom he leaves behind. They were inseparable and adored one another. In lieu of flowers the family request donations be made to the Kristopher Johnson Impact Award Fund https://www.gofundme.com/f/KristopherJohnsonImpact?utm_source=facebook&utm_medium=social&utm_campaign=p_cp+share-sheet&fbclid=IwAR07wrixHhMXg8lJsa1qi00Kgm8-mLBghclGj1Smoqbp7dCxBSRBTmP1Xh8

Kristopher George Oneil Johnson, and his surviving twin sister Kristina, were born on June 28, 1994, to their parents, Selwyn and Darlene Morris Johnson. Affectionately known to most as &#8220;Kris,&#8221; but lovingly called &#8220;Cleo&#8221;... View Obituary & Service Information

The family of Kristopher Johnson created this Life Tributes page to make it easy to share your memories.

Send flowers to the Johnson family.