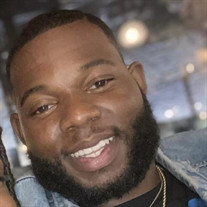 Khristian Deion Harris was born to Jayme Bell-Harris and the late Rev. Kary E. Harris on August 2, 1996, in Atlanta, Georgia. From the time he made his grand entrance during the 96 Olympics, his parents knew he was special. Khristian accepted Christ at an early age and was called into the ministry while at Knox Chapel Baptist Church in Social Circle,GA where he served faithfully. He was a member of The Church International under the leadership of Pastor Jasper and Alecia Williams, and there he served in ministry of Judea & Army of I Am. Khristian graduated from Archer High School. Upon graduation he attended Georgia Gwinnett College. He later furthered his education at the University of Arizona. Khristian worked full-time as a Gwinnett County Public Schools Substitute Teacher. His favorite school being Simonton Elementary (his Alma Mater). He also worked part-time at Old Navy and Amazon, all while pursuing his music career. Khristian loved the Lord! From an early age he preached the gospel, sang (Quartet was his favorite), played the drums, and mimed in the church. And when the spirit hit, he wouldn’t mind exercising his gift of dance. Khristian loved all genres of music! He was always singing, writing or playing the drums, alto sax and keyboard , or just listening. In his spare time he could be found in the studio. Khristian loved people! He never met a stranger, and everywhere he went, he left a lasting impression. He had many friends that he loved dearly and always made time for them. Khristian loved sports and cooking. He played flag football and basketball for GGC. He coached a 8th basketball team. He enjoyed playing golf watching football, basketball and was a pretty good fisherman. He loved to prepare meals for his family and watching cooking shows. And lastly, Khristian loved life, and he lived it to the fullest! Khristian is survived by his mother Jayme Bell Harris, his brother Kary DeSean Harris, his nephew King DeSean Harris, and bonus niece Amaya Marie Carless. Grandmother Jacqueline Bell. Aunts Keisha Bell, Kelly Bowens, Veronica (Kenneth) Brown, Amanda Bowens, Sharon Jackson, Cynthia (Clarence) Porter, and Joyce Adams. Uncles Zachary Matthews, Stony Harris, and Demetrius Harris. God Mother Sylvia Jarrell, God Grandmother Katie Houston. A devoted friend and supporter Stephen Walcott, and a special friend Monique Holmes. Along with a host of great aunts and uncle, cousins and friends.

Khristian Deion Harris was born to Jayme Bell-Harris and the late Rev. Kary E. Harris on August 2, 1996, in Atlanta, Georgia. From the time he made his grand entrance during the 96 Olympics, his parents knew he was special. Khristian accepted... View Obituary & Service Information

The family of Khristian Deion Harris created this Life Tributes page to make it easy to share your memories.

Khristian Deion Harris was born to Jayme Bell-Harris and the...

Send flowers to the Harris family.