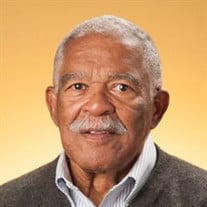 Dr. Kenneth Page Gilliam, 82, of Decatur, Georgia passed Wednesday, January 12, 2022. A Memorial Service will be held at 1:00 PM Saturday, April 30, 2022, at Gregory B. Levett and Sons Funeral Home SOUTH DEKALB Chapel. Due to the COVID-19, a... View Obituary & Service Information

The family of Kenneth Page Gilliam created this Life Tributes page to make it easy to share your memories.

Send flowers to the Gilliam family.