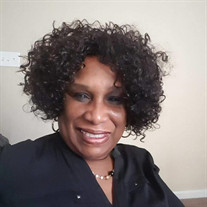 Karen C. Taylor of Conyers, Georgia was born Karen Denise Powell on September 13, 1965 in Richmond, Virginia to James Moore and Clayte Powell. She was James’ oldest and Clayte’s only child. She was raised in Danville, VA and attended Danville City Public Schools. She also spent time in Richmond and Washington, D.C. as a child. Eventually, she would leave Danville and head to Fayetteville, North Carolina, where she met and married Donald Campbell Jr. She would go on to move to Texas, Georgia, Maryland, and Florida, before eventually making her way to metro Atlanta in 2013, where she met and married Leroy Taylor, whom she later divorced in 2017. Karen accepted Jesus Christ as her Lord and Savior at an early age and most recently was a member of RhemaNation Church in Stonecrest, Georgia. From an early age, Karen never met a stranger. She would strike up conversations with people in any place and passersby would presume she had known them for years. Karen is remembered by most as being helpful, kind, and generally a ray of sunshine to all she encountered. In addition to bringing light to the lives of others, Karen most enjoyed retail therapy. She was known to spend hours in stores, especially clothing, shoe, and home goods stores. Decorating her home, The Queendom, spending time with her family, and playing with her dog-daughter, Daisy, were some of her most treasured pastimes. Karen graduated from the University of Phoenix with her Bachelor of Science Degree in Business with a Certificate in Integrated Supply Chain Operations and Management in 2020. Karen’s career in inventory management spanned over two decades across multiple industries, working for companies such as McLane, The Johns Hopkins Hospital, Tampa General Hospital, and Coca-Cola. She most recently served as an Install Coordinator for Stanley Security in Stone Mountain, GA. Karen leaves to cherish and miss her dearly, her father and mother, James Moore and Clayte P. Morgan; three children, Danielle Powell, Ashley Powell, and Donald Campbell III; six grandchildren, Dontavian, Rashad, Trevon, Aiden, Arian, and Tamia; sister and brother, Joylette Gunn and Rontae Perkins; and a host of other family members and friends who are like family. She was preceded in death by her grandmother, Rosetta P. Wimbush; uncle, Burrell Wimbush; sister, Lashana Keen; and beloved dog-son, Mr. Bailey

Karen C. Taylor of Conyers, Georgia was born Karen Denise Powell on September 13, 1965 in Richmond, Virginia to James Moore and Clayte Powell. She was James&#8217; oldest and Clayte&#8217;s only child. She was raised in Danville, VA and attended... View Obituary & Service Information

The family of Karen Taylor created this Life Tributes page to make it easy to share your memories.

Send flowers to the Taylor family.