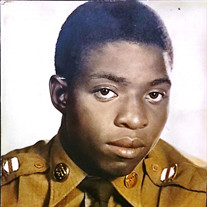 Joseph Hodges Sr. was born in St. George, South Carolina, on August 2, 1932, to the late Friendly and Annie Hodges. For 53 years, he was the beloved husband of the late Victoria Hodges. In addition, he was an incredibly proud dad and a doting grandfather until the Lord called him home on January 30, 2022. In the mid-thirties, his family relocated to Trenton, New Jersey, where he spent much of his formative years and attended the Trenton Public School System. He enlisted in the U.S. Army in 1948 and fought in the Korean War. He was awarded the Army of Occupation Medal while stationed in Germany. After leaving the military, he worked for many years in construction and at Stokes Molded Products as a fabricator. While in Trenton, Joseph followed in his father’s footsteps by attending Asbury United Methodist Church under the leadership of Rev. Fredrick Arnold. He joined Shiloh Baptist Church later in life, under the leadership of the late Rev. Dr. S. Howard Woodson Jr, and Rev. Dr. Darrell L. Armstrong, where he was honored for his contributions to the congregation. In 2003, Joseph migrated south and returned to his roots. He spent 12 years in Concord, NC, a suburb of Charlotte. There he attended Oak Grove Missionary Baptist Church under the leadership of Rev. Dr. Franklin D. Watkins. He spent his final years in Lithonia, Georgia. He is predeceased by his late son: Joseph Hodges, Jr., four sisters: Doretha Hodges, Elease Bullock, Mary Davis, Martha Ponton, and Amanda Gibbons and three brothers: Lone Hodges, Sr., Herbert Hodges and James (Wilmie)Hodges. Joseph leaves to cherish his memories, his 8 children with the late Victoria Hodges: Victoria Carpenter (Herbert), Meldas Hodges (Cassandra), Demetrius Hodges (Tonya), Brenda West, Diana Wilson, Tyrone Hodges (Trina), Gary Hodges (Sonya), Gloria Hodges (Sam) and his 2 children with the late Mary Curry-Hodges: Cynthia Isom, Rose Marie Randolph, his sister, Kim Allen of Trenton, NJ, 18 grandchildren, 22 great-grandchildren, and a host of nieces, nephews, other relatives, and friends. Celebration of Life Services for Joseph Hodges will be held on Tuesday, February 15, 2022 at 10:00AM. These services will be recorded and streamed live. In the event the service is interrupted at any time due to technical issues, the entire service will be uploaded and available to view later in the day. Please copy and paste the link to share, or simply click on the link to view the service. https://vimeo.com/676382712

Joseph Hodges Sr. was born in St. George, South Carolina, on August 2, 1932, to the late Friendly and Annie Hodges. For 53 years, he was the beloved husband of the late Victoria Hodges. In addition, he was an incredibly proud dad and a doting... View Obituary & Service Information

The family of Joseph Hodges created this Life Tributes page to make it easy to share your memories.

Send flowers to the Hodges family.