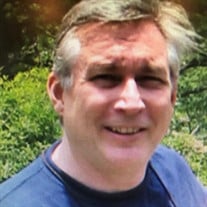 John Heyward Wynn III, 69, of Atlanta, Georgia, passed away at his home of natural causes Saturday, August 7, 2021. He was born in Washington DC November 14, 1951, to Dorothy Helen Howell and John Heyward Wynn Jr. He attended Georgia Institute of Technology and graduated from Georgia State University with a Bachelor of Political Science. In 1985 he married Anne Marie Bohling, the love of his life. He had a lifelong love of technology and electronics, and had a career in contract manufacturing business development. He traveled the world with his wife, especially enjoying Europe and Asia. He loved music and was a disc jockey for WRAS at Georgia State in college. The last few years he became the rock of the family. He planned trips, kept up the houses, built computers for his children and grandchild. He was happiest cooking and grilling for his family on his deck. In addition to Anne, he is survived by his son, Thomas Heyward Edward Wynn, 31 and his Wife Toni Bunker, 35; his daughter Bridget Arianne Wynn, 34 and her husband Matthew Lloyd Hicks, 46, and his grandchildren Celeste Providence Hicks-Wynn, 4, and James Hawthorne Hicks-Wynn, 7 months. There will be a private memorial at his daughter's home. Services entrusted to Gregory B. Levett & Sons Funeral Home, Avondale-Scottdale Chapel. 351 N. Clarendon Ave. Scottdale, GA 30079. (404)294-5500.

The family of John Wynn, III created this Life Tributes page to make it easy to share your memories.

John Heyward Wynn III, 69, of Atlanta, Georgia, passed away at...