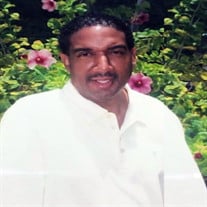 John Randolph was born on April 7, 1965 to the union of Mr. Earl and Mrs. Shirley Randolph of Boston Massachusetts. He was preceded in death by his Father Earl Randolph, brothers Richard Randolph and Charles Randolph. He attended Weston High School in Westin (Boston) Mass however moved to Georgia in his teen years to graduate from Southwest Dekalb High School in Decatur, GA. John Randolph departed this life on December 20, 2021 in the place that he loved to be most - his home. John’s greatest love was his mother. He enjoyed giving to others. He has many friends that has been faithful for decades. John was dedicated to his siblings; nephews and nieces; grand- nephews and grand- nieces. He never met a stranger. He knew and enjoyed fashion. John lived his life enjoying traveling, baking and hosting family dinners. John travels took him all over the world. The places of travel that John spearheaded spanned from Cleveland to Boston, from our nation’s Capital to the many trips to Orlando and other parts of Florida, to Cuba, and Europe, Hawaii and Mexico to name a few. Over the years, he welcomed many to ring in the New Year at his home. Each occasion was unique, all were filled with the love and flavor of family and friends. You could always be assured that there was an abundance of delicious meals to enjoy it all with. Amongst his siblings and extended family members, John was the “go to” person in the group involved in any social event. Whether it was organizing a gathering at his home or finalizing the details of one of many family trips– John was the essential connector. There is a saying, “The devil is in the details”.... Well, in any given project or plans, John had documents and lists in his notebook and crossed every “t” and dotted every “i”; confirmed and reaffirmed to the point where there was absolutely no room for the devil to get in the details of his plans. He insisted on and appreciated the personal details of any occasion. John had mastered many skills in the hotel business. He mastered cooking. He worked at major hotel companies such as Georgian Terrace, Marriott, and Ritz Carlton for over 30 years. John received many awards in the hospitality field. He leaves to Cherish his memory: his loving mother Shirley Randolph of Philadelphia, PA; Sisters Diane (Michael) Granger, Dolores Randolph. and Christine (James) Boddie; brother Earl (Carla) Randolph, Nephews Randolph Granger, Brandin (Candace) Randolph, Christian (Crystal) Randolph, Jason (Latisha) Boddie, Nicholas Boddie; Nieces Ashley (Detoine) Boddie- Smarr, and Diana (Alex) Granger Taker; a host of grand-nephews (6) and grand-nieces (4); a caring Aunt Marlene Jabbar; a host of other cousins, relatives and friends.

John Randolph was born on April 7, 1965 to the union of Mr. Earl and Mrs. Shirley Randolph of Boston Massachusetts. He was preceded in death by his Father Earl Randolph, brothers Richard Randolph and Charles Randolph. He attended Weston High... View Obituary & Service Information

The family of John Frederick Randolph created this Life Tributes page to make it easy to share your memories.

Send flowers to the Randolph family.