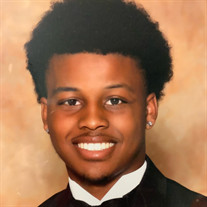 The Story of a Mighty Warrior: John Verlon Johnson Our Great and Mighty Warrior, John Verlon Johnson was born on December 26, 1999 in Lawrenceville, GA to Terry and Yolanda Johnson. He was the second son out of his parent's four boys. John gave his life to the Lord at an early age and was baptized by his late Grandfather, Pastor Lenzo Verlon Scott, from whom he received his middle name. John was baptized at Ellen Burr Baptist Church in Leesville, LA. John's Grandfather knew that he was anointed and called at an early age, and occasionally had him sing, "I'm Gonna Stay Under The Blood" during church services. John's strong voice would rock and move everyone's souls in the sanctuary. John later joined his aunt's church, One Lord House of Worship where Pastor Yvonne Scott Miller resides. John was an amazing football player, basketball player, baseball player; Yes...he was a true All-American Athlete! In everything he did he was GREAT!!! John preached his first sermon at the age of 16 at Central Gwinnett High School, "Stir It Up" celebration. John packed the auditorium and many souls gave their lives to Christ on that day. John leaves to cherish in his memory, his parents, Terry and Yolanda Johnson, three brothers, Terran Johnson, Justin Johnson, and Jerimiah Johnson. Grandparents, Betty Jean Byrd of Shreveport, LA., and John & Mary Pratt of Mansfield, LA. He also leaves behind a host of uncles and aunties, Dr. Lori Hunt of Port Arthur, TX., Dr. Yvonne Scott Miller of Lawrenceville, GA., Ricky & Lydia Stewart of Monroe, LA., Jackie & Letrece Harris of Pine Bluff, AK., Michael & Lisa Broussard of Lawrenceville, GA., Billy Ray Johnson of Shreveport, LA., Sharon Johnson of Lawrenceville, GA, Willie Charles Johnson of Lawrenceville, GA., David Johnson of Shreveport, LA., Chena Johnson of Shreveport, LA., Tameika Hampton of Lawrenceville, GA. Adopted brothers Akeem Wise, Johnathan Ledbetter, DJ Irons, Williams Huzzie, Amhad Burris, Dillon McClain, and Derrick Lawrence; Adopted sisters, Kiante Smith-Saxton & Mauri Hawkins and a host of cousin and extended family. He was preceded in death by his maternal grandparents Rev. Lenzo Verlon and Wilma Scott. John mentored and encouraged many to push and fight past any obstacles that stood against them. I know that John is where he is without the trials and tribulations of this world, and now dwells in a place of love, peace and forever harmony; place Jesus has prepared for him called Heaven! These services will be recorded and streamed live. In the event the service is interrupted at any time due to technical issues, the entire service will be uploaded and available to view later in the day. Please copy and paste the link to share, or simply click on the link to view the service. https://vimeo.com/595568860

The family of John V. Johnson created this Life Tributes page to make it easy to share your memories.

The Story of a Mighty Warrior:

Send flowers to the Johnson family.