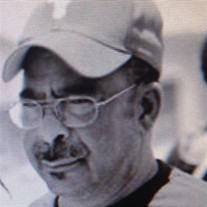 The Story of a Phenomenal Man Oh, I have slipped the surly bonds of earth, put out my hand, and touched the face of God. On May 26, 1951, Ulius E. Gilliam, Sr. and Mary Ruth Young-Gilliam welcomed a second baby boy into their young family, at Hobbyville, SC, where they resided at the time of his birth. May has such a winsome way, loves to love, and to laugh and to play. A handsome lad who was easy on the eye from birth, Jesse Eugene Gilliam, affectionately called "War Dog" by his family and friends, was gregarious, generous, a fastidious worker, and he was possessed of an advanced sense of humor. He never met a stranger, and he was very protective of his immediate and of his extended family. In short, though a kind and an easy-going man, Gene did not take tea for the fever, from anyone. He was generous to a fault, and he would literally give you the shirt off of his back. This child of May affectionately called his younger brother Paul, "Baby Brut". But Paul reports that Gene was spoiled by everyone and got just what he wanted. Paul thus logically concluded that it was Gene---- and not himself---- who received the baby benefits! A delicate fabric of bird song floats in the air, the smell of wet wild earth is everywhere. An avid produce gardener, he shared the bounty of his gardens with families in the community. He also raised chickens, and doled out eggs to multiple area families. If he heard about a bereaved family, Gene sprang into action, organizing groups to cut and to clear lawns, and other debris from those properties. He was a fishing enthusiast, and he so enjoyed this pastime that he arranged fishing competitions. Gene did not fish to eat; rather, he did so out of sheer enjoyment. And after cleaning and preparing his catch, he readily shared the fresh fish with area fish lovers. A man who enjoyed his motorcycles, Gene owned at least three of them, and he relished recreational riding with his friends. He also liked hanging out with his four pet canine companions, Yank, Skip, Buster and Midnight. Educated in the public schools of District # 4 Schools, Gene's vocation was that of a professional truck driver, and his skills set in his chosen profession earned him membership in the Million Mile Club. A hard and dedicated worker, he also received multiple commendations and performance awards for his good work. He retired from National Starch & Chemical Company in 2008, after over 25 years of meritorious service to the company. He was a man who was proud of his family, his two daughters and his grandbaby. One of Gene's proudest moments was the day in which his beloved grandaughter, Daiona Gilliam, earned her baccalaureate degree from the University of South Carolina-Upstate. Come walk with me along this willowed lane. The winter's breath of snow and sleet on our faces beat. Gene, A son of May. But in the march seasons, it is not always the month of May in our lives. Fall comes as well, and with it, twin sorrow and loss. O hushed October morning mild, Thy leaves have ripened to the fall; Tomorrow's wind, if it be wild, Should waste them all. The crows above the forest call. Jesse Eugene Gilliam passed into eternity on October 24, 2021. He was predeceased by his father, Ulius E. Gilliam, Sr., by his nephew, Reginald Muhammad, and by his eight brothers-in-law, Michael Clark, James Byrd, Sr., Bobby Joe Irby, James Irby, Bobby Beagles, Johnny B. White, Johnny Irby, and Willie Harris. He was also predeceased by two sisters-in-law, Sarah Jean Beagles and Edna B. White. Gene's keepsake memory will be harvested by his many loving survivors: his wife of fifty years, Inez Irby Gilliam, of SC, his two daughters, Kami G. Byrd, of SC, Michelle Gilliam, of GA, and his granddaughter, Daiona Gilliam, of SC. He is also survived by his loving and devoted mother, Mary Ruth Gilliam Dogan, of SC, by his four siblings, Minister Ulius E. Gilliam, Jr. (Doris) of SC, Paul Gilliam (Sandra) of SC, Sandra Gilliam-Clark, of SC, and Lillie Ruth Browning-Byrd, of SC. He is also survived by one sister-in-law, Janie M. Harris, of SC. Surviving as well are his maternal aunts, Dora Hunter, of MD, Emma Young, of SC, Jimmie Nell Smith, of SC, and Drucilla Nesbitt, of PA. He also leaves to cherish sweet memories of his life, a special niece, Angela G. Walker (Mark), of SC, a goddaughter, August Alexander, of SC and a god-great-granddaughter, Paisley Davis, of SC. Gene also leaves behind many sorrowing nieces, nephews, cousins and close friends. Memory is a capricious and an arbitrary creature. You never know which pebbles she will pluck from life's beach, to store among her treasured things.

The Story of a Phenomenal Man Oh, I have slipped the surly bonds of earth, put out my hand, and touched the face of God. On May 26, 1951, Ulius E. Gilliam, Sr. and Mary Ruth Young-Gilliam welcomed a second baby boy into their young family, at... View Obituary & Service Information

The family of Jesse Eugene Gilliam created this Life Tributes page to make it easy to share your memories.

The Story of a Phenomenal Man
Oh, I have slipped the surly bonds...

Send flowers to the Gilliam family.