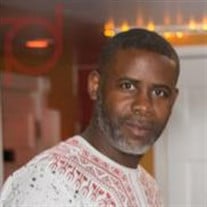 Jacques Allrich, Jr of Smyrna, Georgia passed Thursday, December 23, 2021. Celebration of Life Service will be held 11:00 AM on Saturday, January 8, 2022 at Gregory B. Levett and Sons Funeral Home SOUTH DEKALB Chapel 4347 Flat Shoals Parkway Decatur, GA 30034. (404)241-5656. Click here to watch live stream: https://vimeo.com/event/1059698 Please express your condolences here on our website. *************************************************OBITUARY********************************************************* Jacques Allrich Jr. was born on July 1, 1968 in Port-au-Prince Haiti. He was the eldest son of the late Jacques Allrich Sr. and Therese Allrich. At the age of 6, he relocated to the United States where he was raised in Irvington, New Jersey. He attended Blessed Sacrament School in Newark, New Jersey and graduated as the Valedictorian of the 1983 graduating class. In high school, he graduated Salutatorian of 1987 Irvington High School graduating class. During his time at Irvington High, he was a decorated member of the Honor Society, The French Club and The Drama Club. In his numerous thespian efforts, he was featured in various productions such as Grease and The Wiz, where he played as the scarecrow. Jacques was voted “Most Likely to Succeed” at Irvington High and received a full scholarship to attend New Jersey Institute of Technology (NJIT). Even while working several jobs as a young man, the bulk of his career was spent as an entrepreneur. Jacques was a creative spirit and expressed this in many ways. He authored the inspirational self-help book entitled, “About Your Power.” He was also a poet, eloquent speaker, and mentor to many. He was an amazing and loving father to his daughter MiAngel Soley Allrich. Jacques took great pride in his daughter’s spiritual and emotional well-being, as well as her academic and athletic accomplishments. Jaques will be remembered most for his loving and caring personality. He had the ability to make anyone happy; Jacques’ laugh and smile could fill a room. Jacques would do anything for anyone and always looked for the best in others. He was so uplifting, encouraging, and optimistic about life. Jacques always believed failure was not an option. As the eldest sibling of the Allrich family, Jacques’s smiling face and positive attitude will be deeply missed. He established a foundation for his siblings to think outside the box and maintain a positive outlook on life. Jacques Allrich, Jr. made his transition on December 23, 2021 in peace surrounded by family and a lot of love. With the resources Jacques utilized and his belief in the body’s ability to heal with the right resources, Jacques lived an additional four amazing years after receiving a rare cancer diagnosis. In those four years, Jacques accomplished so much. He made peace with his past, healed several open-ended relationships, had a thriving career in cryptocurrency, established a loving relationship, traveled to several places that were lifelong dreams and so much more. As he drifts to eternal peace, the Allrich Family acknowledges the loss of a brother, a friend, and a dear soul. Nevertheless, the family spearheads the significant legacy of empowerment, creativity, and freedom that he has left behind. May he rest in eternal peace. Jacques leaves many to cherish his memory and legacy including his daughter: MiAngel Soley Allrich of Atlanta, Georgia. His three sisters Nirlande (Emmanuel) Allrich-Gachette of Paterson, New Jersey, Emmeline (Jacques) Allrich-Lamothe of Lilburn, Georgia, Rachelle Tapper of Irvington, New Jersey; four brothers: James (Akua) Allrich of Upper Marlboro, Maryland, Billy Allrich of Lithonia, Georgia, Vladimir (Angelica) Allrich of Milburn, New Jersey, and Wayland (Rekyia) Allrich of Catonsville, Maryland; along with a host of nieces, nephews, cousins, aunts, uncles, and close friends.

The family of Jacques Allrich Jr. created this Life Tributes page to make it easy to share your memories.

Send flowers to the Allrich family.