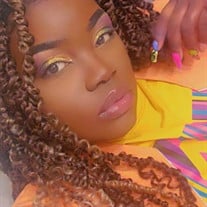 Ja'Nae Knechel Newton, 28, of Ellenwood, GA passed on Wednesday, February 23, 2022. Celebration of Life Services will be held on Thursday, March 3, at 1 PM in our chapel. Visitation will be on Wednesday, March 2, 2022, from 12 PM-8 PM. Ja’Nae Knechel Newton was born on October 13, 1993 in Toledo, OH to James Webb Williams, III and Lisa Newton-McKinney. Ja’Nae spent most of her childhood in Toledo until 2008 when she relocated to San Antonio, TX. with her immediate family for 3 years. In 2011 she moved to Ellenwood, GA where she resided until her passing. Ja’Nae graduated from Cedar Grove High School in Ellenwood, GA in December 2012. After completing high school Ja’Nae matriculated at Bauder College in Atlanta, GA majoring in Criminal Justice with hopes of advancing her studies to forensics. She missed her hometown and moved back to Toledo in 2017 to be closer to friends and family. There, she enjoyed working at The Anderson’s as a warehouse associate. In 2018, returned to GA and began working at Gus’s Fried Chicken where she was quickly promoted to baker. Ja’Nae loved cooking and baking as enabled her to meet many wonderful people who enjoyed and complimented her work. With encouragement by her mother, Ja’Nae resigned after a year and took a job at Meadowbrook Health and Rehab to work as a dietary aide. She later began to assist with cooking meals for the long-term care residents. She adored the elderly patients and was highly respected for her hard work by co-workers and staff. The job change was the smartest move because shortly after, the pandemic hit. Ja’Nae was grateful for her mother’s advice as she was fortunate to continue working in a medical facility while many others couldn’t do so. Ja’Nae also enjoyed driving and would drive for Uber & Lyft on her days off. She was loved by many of her co-workers and passengers. In fact, several of her Uber/Lyft passengers loved her so much that they would hire Ja’Nae to drive them privately. She also worked in overnight stocking at Wal-Mart. Ja’Nae was a very hard worker and enjoyed obtaining experience and making her money. Ja’Nae was a true artist. She loved applying make-up, styling hair, art (painting), drawing, music, and spending time with her niece and nephews. Ja’Nae was preceded in death by her Grandfather Robert Newton (OH), Grandmother Marsha L. Williams (OH), and cousin Kyle (KJ) Newton Jr. (OH). Ja’Nae is survived by brothers J’Juan Newton (GA) and J’Mere Newton (Dawn Perkins) (GA; grandmothers Deborah Carson (VA) and Angella Newton (OH); aunt Marguerite (Tracy) West (VA); uncles Kyle Newton Sr. (OH) and Terrance Newton (OH); nieces Ciara Allen (CA) and Wynter Newton (GA); nephews Kaiden Newton (GA), Isaiah Newton (GA) and Ilijah Newton (GA), and a host of other family members and friends.

The family of Ja'Nae Knechel Newton created this Life Tributes page to make it easy to share your memories.

Send flowers to the Newton family.