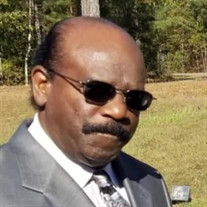 Harvey Lee Smithers departed this life on Tuesday, January 18, 2022. He was born in Caroline County, Virginia on August 27, 1952 to the late Manley Smithers, Sr. and Estelle Fells Smithers. He accepted Christ and was baptized at Ebenezer Church of Our Lord Jesus Christ of the Apostolic Faith in Richmond, Virginia. He remained steadfast in his faith in the Lord. He attended Union High School in Bowling Green, Virginia. He furthered his education by attending J. Sargeant Reynolds Community College, University of Maryland, and Central Texas College. Harvey enlisted in the U.S. Army at an early age. During his tenure, he earned numerous awards and accolades for exemplary service. After serving in the military for five years, he returned home to work at the Smithsonian Institute in Washington, D.C. Next, his work journey took him to the United States Postal Service where he worked as a carrier in Richmond, Virginia and Atlanta, Georgia. He was awarded Postal Carrier of the Year several times and earned numerous Safe Driving Awards. He was most proud of receiving “The Over One Million Miles Safe Driving Award.” Harvey was a dedicated worker and rarely missed a day. He loved being in the military and working for the Postal Service. Harvey took great pride in his appearance. He was a sharp dresser and prided himself in his cleanliness. He was also a very good cook. In his leisure, Harvey enjoyed cooking delicious meals and watching all sports. Those remaining to cherish his memory are: sister, Vernell Dabney of Ashland, Va., sister, Claretha “Cookie” Ector (Moses of Conley, Ga.), Jeanette “JJ” Jones of Richmond, Va.; nephews Russell Pleasants, Jr., Ken Dabney (Ola), Gary Dabney, Jason Dabney (Madina), Reggie Dabney (Lisa), Victor Jones, Torrey James, Jeffrey Arnold (Jasmine), nieces: Crystal Monroe (Chester) Sandra Mallory (Robert), Lori Smithers, Chekesha Johnson, Monica Dabney, Tina Morton (Stephen), and a host of great nieces, great nephews and other relatives.

Harvey Lee Smithers departed this life on Tuesday, January 18, 2022. He was born in Caroline County, Virginia on August 27, 1952 to the late Manley Smithers, Sr. and Estelle Fells Smithers. He accepted Christ and was baptized at Ebenezer Church... View Obituary & Service Information

The family of Harvey Lee Smithers created this Life Tributes page to make it easy to share your memories.

Send flowers to the Smithers family.