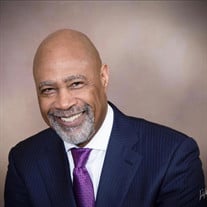 Harlan Jerome “G-Man”, “Jeep”, “Bae”, “Pops” Carter was born in Tuscaloosa, Alabama on April 14, 1955 to Nancy Carter. He was one of eight children. Harlan attended Druid High School and was a proud Druid Dragon, class of 1972. At the age of 18, Harlan enlisted into the military and actively served our country in the Navy from 1973 to 1977 before joining the reserves and officially retiring in 1979. At San Diego State University, he joined the brotherhood of Omega Psi Phi Fraternity, Inc. when he pledged Phi Omicron Chapter in the Spring of 1978. Harlan earned a Bachelor’s Degree in Business from California State University, Dominguez Hills. He began his career at the Internal Revenue Service (IRS) as a Revenue Officer. His 29 year career spanned from coast to coast before retiring as the Special Agent in Charge in the Houston, TX field office in 2007. During his time at the IRS, Post retirement, Harlan stayed busy and utilized his skills working with the City of Jackson, J.P. Morgan Chase and Saks Fifth Avenue. Preceding him in death was his beloved mother Nancy Carter; his sister Adeline Harris; his brother Isiah Carter; brothers-in-law: Bill Harris and Charles Watson and his sister-in-law Diane Gladney. He leaves to cherish his memory, The Love of his Life Tracey Walker-Carter; his children: LaTreish Carter, Jeon Carter and Jamila Allen- Carter; his bonus children: Xaviara Walker, Xavier Walker and Maya Banks; his granddaughter Tiyanah “OG TiTi” Walker- Jones; his siblings: Andrew Gladney, Ada Harris, Charles Ray Carter, Elaine Watson and David Carter; his brother-in-law Colonel Ronny Johnson and his sisters-in-law: The Honorable Audrey Moorhead and LeAnn Cox and his faithful companion Gucci Carter. His legacy will live in the hearts of a host of aunts, uncles, cousins, nieces, nephews and other relatives and friends.

The family of Harlan Jerome Carter created this Life Tributes page to make it easy to share your memories.

Send flowers to the Carter family.