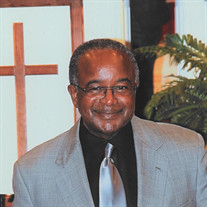 Gus Dixon was born on November 22, 1946, to the late Gus Dixon, Sr., and Jimmie Lou Person Dixon, two God-fearing parents, in Franklin (Heard County), Georgia. He was the second of four siblings, one who preceded him in death, his sister, Hazel Dixon Easter. He attended elementary and high school in Heard County (Franklin, GA), and then attended Tuskegee Institute in Tuskegee, Alabama, during which time he was drafted into the U.S. Army. After basic and advanced training, he attended the Officers’ Candidate School in Ft. Benning, GA, and after graduation, he was promoted to 2nd Lieutenant, becoming 1st Lieutenant one year later when he received his wings, and then Captain two years after that. He was a helicopter pilot serving two tours of duty in Vietnam. Because of his exemplary service, he was awarded the Purple Heart and the Distinguished Flying Cross. He was promoted to the rank of Major while in the Reserves. After the military, he worked in the insurance industry and then the security industry, starting his own security company in the late 90s. He married Willie Mae Easter, a native of LaGrange, GA, on July 1, 1967—a beautiful and adoring wife and friend with whom he shared a blessed partnership of over 54 years. He is the father of one daughter and one son (who died as an infant), the grandfather of seven grandchildren whom he adored, and the godfather to an amazing group of godkids and “adopted” kids. His favorite pastimes included spending time with his grandchildren, gardening, swimming, assisting in the kitchen by showcasing his cooking skills (even entering cooking competitions with family members), and running in the Peachtree Road Race. As a man of deep, abiding faith, Gus Dixon served the Lord in many ways. He was a deacon, ordained at Welcome Friend Baptist Church in 1983. He also served as a deacon at Solid Rock Missionary Baptist Church for a season in Lewisville, TX under Rev. Alvin Turner. Upon his return to Georgia, he continued his service at Welcome Friend, later serving as Superintendent of Sunday School, then as Director of Christian Education. He sang in the choir, male chorus, and served in many other capacities. He was an inspiring Bible teacher who enthusiastically shared God's Word with whoever was willing to listen. His desire to learn and share Scripture led him to attend Jehovah Jirah Bible Institute HL, where he became Dean of Academics and received his Ph.D. in Apologetics and World Missions.His greatest accomplishment was his total acceptance of Jesus Christ as his Lord and Savior. Deacon Gus Dixon (or "Jr.") leaves to both mourn and celebrate a life well-lived, his devoted and loving wife, Willie Mae Easter Dixon, his daughter and son-in-law, Shannon Dixon Clark and Terry Clark, his seven grandchildren, Jamáre, Natalia, Kamaria, Joshua, Rhainen, Hezekiah, and Micah Clark, two brothers Eugene (Betty) Dixon and Donald (Pam) Dixon, aunts, uncles, cousins, nieces, nephews, godkids, neighbors, friends, his Pastor and First Lady Dr. John & Darla Smith, and the Welcome Friend Baptist Church Famil

Gus Dixon was born on November 22, 1946, to the late Gus Dixon, Sr., and Jimmie Lou Person Dixon, two God-fearing parents, in Franklin (Heard County), Georgia. He was the second of four siblings, one who preceded him in death, his sister, Hazel... View Obituary & Service Information

Send flowers to the Dixon family.