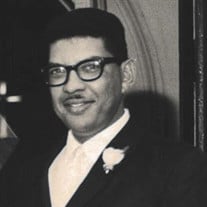 Grover Cleveland Simmons, Jr., was born December 13, 1932, the youngest of seven children, in Milstead (Rockdale) Georgia, to the late Grover Cleveland Simmons, Sr and Lizzie Wells Simmons. He received his early education in the Rockdale County public school system. He graduated from Bryant Street High School in 1949 an entered Morris Brown College in 1952. Two years later, hearing the call to military service, he joined the United States Marine Corps where he served six years and nine months and then returned to graduate from Morris Brown in 1959. Pursuing his thirst for knowledge Grover entered Atlanta University where he received a Master of Science degree in Mathematics in 1962. While in college, he became actively involved in the Civil Rights movement, participating in sit-ins at lunch counters, and marching for freedom and peace. In 1965, he ran for political office, mayor in city of Conyers. In 2015, he received a letter of recognition from the City of Atlanta for his participation in the Student Sit-In Movement during the 1960s. Using his God given “gifts” he answered the call to teach, and accepted a position at Virginia State University, Petersburg, Virginia where he taught from 1962 - 1965 and met his wife, Geraldine (Geri) Darkins Simmons. While there he became a member of several professional organizations: Kappa Mu Epsilon Honor Society in Mathematics, Tuskegee Airmen, Inc. (TAI-Howard Baugh chapter - Petersburg, VA), Educational Computing in Minority Institution (ECMI) and Association of Computing Machinery (ACM). In 1965, Grover moved back to Georgia, where he pursued a Doctor of Philosophy degree in Mathematics at Emory University in Atlanta. Using his skills and education he taught Computer Science at the Atlanta University Center. He was employed at the Atlanta University Center as Director of Computer Science from 1965 - 1999 and taught Information Science/Computer Science, mentoring many students. He was also a member of the DeKalb chapter of the Morris Brown Alumni Association. In the 1980s while he was Director of Computer Science Department at the Atlanta University Center, he was a member of a group of educators at HBCU universities who were setting up computer science departments. It was in this group at North Carolina A & T University, Greensboro, NC where he first met a Stanford graduate and professor, Rev Dr. John Foster, Phd who later became his pastor. In the 1990s Grover represented Rock Temple AME Church in the King and Crown Prince Contest, an annual event honoring man, held by the Atlanta North Georgia Conference Lay Org. He has been active in the local Lay organization for over 20 years but only got involved outside of the local church when his wife became active on the Atlanta East District. Together they have journeyed to General Conferences as “Observers” since 1996. General Conferences have been their vacations for 8 days every four years. Since 1990s Grover and his wife have participated in Christian Education Workshops (Augusta), MidYear Conferences (Macon & Columbus) under Bishops Ming, Cummings, DeVeaux, Williams and Jackson and Founders’ Day in Savannah, GA and Macon, GA. Grover has represented Rock Temple AME Church as its delegate to Annual Conference for more than 20 years. He has served as Chair Pro-Temp of the Steward Board for the past 20 years and was Chair Pro Temp of the Trustee Board for 10 years. He served on the Finance Committee, Steward Board, Sons of Allen, Lay Organization (Local Vice President) and has been honored as Man of the Year and on Veterans Day. He was the Atlanta East District Lay Person of the Year in 2016. van. During Grover’s years of employment, the meetings and conferences made it possible for him to live and travel to many places in the United States; he studied Computer Science at Purdue University, West Lafayette, Indiana; lived in Boulder, Colorado for four (4) months while doing research at The National Center for Atmospheric Research; San Diego, California conducting computer workshop; Bell Laboratories, Murray Hills, New Jersey, teaching computer language workshops; and at Fort Monmouth, New Jersey. He initiated one of the first Computer Science programs in the state of Georgia. Having developed an adventurous spirit Grover and Geri have done extensive traveling both within the Continental United States and Internationally; from Maine to New Mexico, visiting with the chief of the Navajo Nation and Vancouver, BC to Nova Scotia, visiting with friends along the way accompanied by Bernie their faithful “companion” dog. Grover was married to Geri, his devoted wife for 55+ years. He is survived by a sister, Lucy Simmons Pennington, daughter, Donna Simmons Davis, from his first marriage, and three grandchildren: Alphonso Lewis, Mason Davis and India Davis, nieces and nephews and cousins. Three caring and supportive godchildren: Angela Butler (Leesburg, VA), Cheryl Taylor (Ashburn, VA) and Annette Smith Lee (Petersburg, VA) are among the numerous friends that have been on this journey throughout the past few months. Quietly, during the morning of Monday, April 11, 2022, God, in His infinite wisdom, gently removed from our midst GROVER CLEVELAND SIMMONS, JR - husband, father, grandfather, brother, uncle great uncle, cousin and friend. After enduring three weeks of acute illness, his passing came peacefully as he slept.

The family of Grover C. Simmons Jr. created this Life Tributes page to make it easy to share your memories.

Send flowers to the Simmons family.