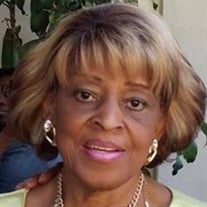 Gloria Jean Witherspoon was born in East St. Louis, IL on December 1, 1942 to Wesley B Witherspoon Sr. and Cleadith Mae Witherspoon. She was the third daughter of five children. Gloria confessed her love for Christ at an early age and was baptized at Mt Zion Baptist Church where her long walk in faith began. She graduated from Lincoln Sr. high School in 1961 and began her career in corporate America. Her first job was with Illinois Bell Telephone Co. and from there she went on to Laclede Gas Co. where she worked in customer relations for over 30 years before retiring. While at Laclede Gas Co. she made history as the first African-American to work in the downstairs business office. This was paramount during this era. She was dedicated and loyal worker who often bragged on the amount of correspondence, mail and email she answered per day. She was proud of her work ethic and how she opened doors for other people of color. She was also a member of the Urban League-St. Louis Chapter. While at Laclede Gas Co. she attended a local Jr college and received her associates degree. Gloria was very active at First Baptist Church of Golden Garden, where she served on the adult usher board and supervised the junior usher board. She took her role very serious. She was always involved in activities where youth were involved. She loved to mentor young girls and teach classes on etiquette and becoming Christlike women. She enjoyed commentating fashion shows and modeling. She was a true Diva in every sense of the word. Later she became a member at The Faith House where Rev. Willie D. Brown is pastor. Gloria had a huge heart, although sometimes she tried hard to hide it. She was always looking for ways to give to those in need. She never had children of her own so she treated everyone like her children. Gloria and her sister Saundra relocated to Atlanta to be closer to family. Here she found her new church home Salem Missionary Baptist Church. She faithfully attended Sunday service, bible study and senior activities. Gloria joined ETA Sigma Philos (Sigma Gamma Rho,Inc) in 1983 in IL and served as National and Local President and Vice-President. She continued her service here in Atlanta. Gloria delighted in shopping and traveling with friends. Europe was her most cherished vacation. She loved family gatherings and having fun talking and dancing. She could be the life of the party. She was never big on cooking, but dessert was her favorite food. Gloria may have been the third born but she was always the boss, and everyone knew it. She made sure no one ever hurt or took advantage of a loved one. She started as a bit of a tomboy who would beat up her little brother’s bullies, but she grew into one of the most beautiful and stylish women both inside and out. When her baby sister Mary Ann passed, she stepped right up to help out with her three young boys. She was always there to help and spend time with her nieces and nephews. She would sometimes put on a tough exterior, but everyone who knew her knew she was a marshmallow inside who loved hugs! Gloria was diagnosed with Lewy Body Dementia (LBD) three years ago and fought to the very end until she received her beautiful wings on October 10, 2021. She will be forever loved and missed by her sisters, Saundra Rule and Lenora Crockett; brother, Wesley B. Witherspoon Jr. (Rosie); Nieces/Nephews, Cheryl Gordon (Cornell), Keith Crockett, Kimberly Blow (Paul), Cynthia Phelps (Demone), Ronald Houston Jr. (Tammy), Joanna Witherspoon, Corey Houston (Janae), Doug Robbins (Murey), Wesley B. Witherspoon III ( Frieda), Thaddeus “TJ”Houston and a host of cousins, great and great-great nieces and nephews; Friends, Barbara Carter, Haeju “CeCi” Abresch, Joan Doss and many, many, more! Preceded her in death; parents, Wesley B Witherspoon Sr. and Cleadith Mae Witherspoon; brother, Edward Witherspoon; and sister, Mary Ann Houston all of IL.

Gloria Jean Witherspoon was born in East St. Louis, IL on December 1, 1942 to Wesley B Witherspoon Sr. and Cleadith Mae Witherspoon. She was the third daughter of five children. Gloria confessed her love for Christ at an early age and was baptized... View Obituary & Service Information

The family of Gloria Jean Witherspoon created this Life Tributes page to make it easy to share your memories.

Send flowers to the Witherspoon family.