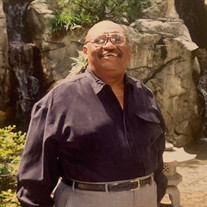 Eugene (Gene) James Lynch On June 27, 1940, Adolph Lynch and GraceConte were blessed with a son. He was the first grandchild and was reared by his grandparents James and Gladys Shields. He was dearly loved by them and given the nickname “Shamus.” He attended Thessalonia Baptist Church, Reverend James A. Polite pastor, where Gene sang in the Young People’s Choir, was baptized, and gave his life to God. He was educated in the New YorkCity Public School system. He was an excellent student throughout his matriculation. He briefly attended Music and Arts High School, where he played the clarinet. He graduated and earned his High School Diploma (with honors) from Morris High School (Bronx, NY). Gene was a hard worker and passed the NYC civil service testto earn a job as a train conductor. In 1962, he united in holy matrimony to Shirley Ross of Galveston, Texas, and to this union two children were born, Curtis James Lynch (Norcross, GA) and Yolanda Elenanor Lynch (Suwanee, GA.) After a few years he took another test that would define the remainder of his career. Later he tested and was admitted to the Police Academy. A successful score allowed him to join the New York City Transit Police Department as a uniformed Police Officer. Later, another test would earn him a promotion to Detective. He received multiple letters of commendation. In 1978, an article was published in the Newsday Daily News for his work in solving a highly publicized crime. He retired in 1986 and relocated to Stone Mountain, Georgia. In relocating he married Ollie Faulk and gained a second son Dexter Tyrell (LaToya) Faulk (Kansas City, MO). He leaves to mourn five brothers, Hayward (Georgia) Lynch (Raleigh, NC),Richard Lynch (Raleigh, NC), Paul(Michelle) Lynch (Jacksonville, FL); Steve and Richard Lynch (Greensboro, NC). Three sisters, Roberta (Carlton) Jennings, Mary (Nathaniel) Gidron (Yonkers, NY), Edna Lynch (Bronx, NY).In addition to his children, he leaves to mourn his memory, six grandchildren, Mariama and Khenan Lynch (Sydney, Australia); Garrett and Phillip Head (Suwanee, GA), Destiny Faulk (Pembroke Pines, FL) and Laila Faulk (Kansas City, MO), and a host of nieces, nephews, and friends. Gene loved to travel. He was an avid reader of mystery and crime story novels, especially Ian Flemming (James Bond) books. He also enjoyed watching classic black & white movies, listening to jazz music, singing, and watching his favorite basketball team, the NY Knicks. But his favorite thing to hold, besides his grandchildren, was the remote control.

Eugene (Gene) James Lynch On June 27, 1940, Adolph Lynch and GraceConte were blessed with a son. He was the first grandchild and was reared by his grandparents James and Gladys Shields. He was dearly loved by them and given the nickname &#8220;Shamus.&#8221;... View Obituary & Service Information

The family of Eugene James Lynch created this Life Tributes page to make it easy to share your memories.

Send flowers to the Lynch family.