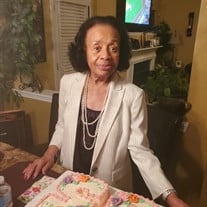 The Life and Legacy of Ms. Eleanor Jewel Motley, Educator Eleanor Jewell Motley was born on September 10, 1934, in Madison Park Montgomery, Al to the late Minnie H. Hall and the late Fausy Motley. At an early age of three Ms. Motley was diagnosed with polio and lost the ability to walk. Ms. Motley was a fighter. With the treatment and help of St. Jude Children Hospital Memphis, TN she beat polio and was able to learn to walk and never looked back. She attended Madison Park Elementary and Junior High School. Her mother moved them to Montgomery where Eleanor attended Booker T. Washington until her sophomore year and then attended and graduated from Alabama State University Laboratory High School also known as Lab High in 1954. Eleanor then enrolled in Alabama State University and graduated with a Bachelor of Science Degree in Business Administration in 1958. After graduation, Eleanor took her first teaching job at Fairmont High School in Griffin, GA. After teaching in Griffin for several years, she was hired at Roosevelt High School in the Atlanta Public School System where she taught Business until her retirement in 1992. At APS she helped to implement the Career Exploration Program (CEP) in the early 1960’s which still exist. During her time at Roosevelt High School Ms. Motley was selected to participate in a program at the University of Georgia at the Master’s Level to learn the programs to implement the Career Exploration Program (CEP). Ms. Eleanor Motley was a teacher’s teacher. Ms. Motley looked at all of her students with the potential for success with only the right guide dance. She treated them all as if they were her own children. Ms. Motley never had children but she actually had thousands. The lives that she touched is shown in the Atlanta Public School Certificate of Recognition she received on May 26, 1993 which states “You Touched the Future” and her Teacher of the Year award 1986-1987 from Southside High School. Because of her dedication to her profession and to her students she was loved and respected by her superiors, colleagues and her students. Ms. Motley was loved and respected by all who met her. Teacher of the Year 1986-1987 Southside High APS Certificate of Recognition May 26, 1993 You Touched the Future Georgia Association Of PECE Coordinators Certificate of Merit 7 August 1985 Atlantic City School National Honor Society in Business 1973 Ms. Motley never married nor had any children of her own however, through her teaching of many, many children as a teacher she affected many, many lives in a positive manner. Ms. Eleanor Jewel Motley leaves to cherish her memory relatives and friends.

The family of Eleanor Jewel Motley created this Life Tributes page to make it easy to share your memories.

The Life and Legacy of Ms. Eleanor Jewel Motley, Educator

Send flowers to the Motley family.