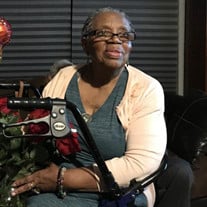 Elaine Woodruff Minton Gary made her debut on September 30, 1937, in Brooklyn, New York. She was the youngest out of six children born to Albert and Ada Woodruff and was a first-generation Bajan-American. She was a sweet, humble, and helpful child always willing to assist in any way possible. Her passions were cooking, sewing, and spreading love to others through the word of God. She was a graduate of Jamaica High School in Jamaica Queens, New York. She dedicated her life to Christ at a young age as a Christadelphian in the Christadelphian Ecclesia. Elaine married Kenneth Ulysses Minton and to this union was born four children Kenneth, Celeste, Arthur, and Michelle. Elaine became a school lunch helper at P.S. 48 elementary school in Jamaica Queens. In an unfortunate turn of events, Kenneth U. Minton was called home to the Lord at an early age leaving Elaine as a widow with four young children. A few years after his death, she met a co-worker named William Gary. William and Elaine married years later and blended their families. It was around this time that Elaine left P.S. 48 elementary school and became the school lunch manager at The Ida B. Wells School. Elaine was a determined, hard worker who set goals and wanted to further her education, at Queens College, while advancing her career to make a better life for her family. Elaine worked days and attended school at night while taking care of her aging mother Ada Woodruff as well as her siblings. Elaine graduated from Queens College with a Bachelor of Science degree in Nutrition with a minor in education. Her newly acquired degree opened the door for her to change career direction and become a Paraprofessional. As a paraprofessional, she enhanced the lives of young special needs and disabled adults. She continued this career path until retirement. Later in life, she decided to switch gears and leave New York and move to Hot Springs, Arkansas to continue caring for his aging mother. Elaine and William continued to live in Arkansas beyond his mother's death. Elaine's loving and gentle demeanor allowed her to touch the lives of all she encountered and never met a stranger. She opened her heart and doors to many in the neighborhood as well as abroad. As the years passed Elaine and William moved to Stone Mountain, Georgia to be closer to family. Elaine transitioned to be with her Lord on August 26, 2021. She leaves behind to cherish her memory her husband of 30 plus years, William Gary, she leaves her four loving children, Kenneth (Nikki) Minton, Celeste Minton, Arthur Minton, and Michelle Minton. She also leaves behind two stepdaughters, Crystal and Donna, sons and daughter in law, Floyd, Nikki, and A-shan, as well as a plethora of grandchildren, great-grandchildren, nieces, nephews, family, and friends. To be absent from the body is to be present with the Lord (2 Corinthians 5). May we all remember her in her beauty and grace as the Queen that she was to us all. Celebration of Life Services for Elaine Minton-Gary will be held on Thursday, September 9, 2021 at 11:00 AM. These services will be recorded and streamed live. In the event the service is interrupted at any time due to technical issues, the entire service will be uploaded and available to view later in the day. Please copy and paste the link to share, or simply click on the link to view the service. https://vimeo.com/599669964

Elaine Woodruff Minton Gary made her debut on September 30, 1937, in Brooklyn, New York. She was the youngest out of six children born to Albert and Ada Woodruff and was a first-generation Bajan-American. She was a sweet, humble, and helpful... View Obituary & Service Information

The family of Elaine Minton Gary created this Life Tributes page to make it easy to share your memories.

Send flowers to the Gary family.