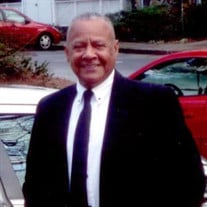 Edward Douglass Woodard was born on February 10, 1942 in Baltimore, Maryland to the late Mildred and William Woodard. He graduated from Dunbar High School in Baltimore and continued his education at Dundalk College. Edward pursued a dedicated and determined career at Western Electric in Baltimore, and in 1984, transferred to Norcross, GA. He served on the managerial team at the plant formerly called Lucent Technologies. He later retired from his Lucent family after 33 years of hard work and dedication. His dedication and faithfulness proved true in not only his work ethics, but his family life as well! On October 1, 1959 he married his high school sweetheart, Velma L. Moore. From this union they had one son, Edward Jr. and two daughters, Velissa Yvette and Mamie Daphine. Edward spent countless hours pouring into his family, friends, neighbors and anyone else who could spare a moment. He was an avid pool player, enjoyed traveling and working on home projects. He enjoyed gardening, planting seeds and watching them grow. He joined the “Ford Thunderbird Super Coupe Club” as he owned several makes and models and was constantly restoring cars. Edward also loved to help anyone and was well known for his sense of humor and personality. He was considered a second dad, grand-dad and uncle to many families, friends and neighbors. In his work and dedication, he and Velma joined Salem Missionary Baptist Church in 1990. He was always in the background working on some secret project for Senior Center or Vacation Bible School. He loved hanging out on the Senior Trips and events, but never really thought he was a senior. He faithfully believed in working hard and shared his knowledge with everyone. He lived his life as a servant to others. Edward was preceded in death by his mother, father, sister (Jacqueline Woodard) and brother (Lawrence Brown). He is survived by his loving and faithful wife of 61 years, Velma Louise, his three children, Edward Woodard (Rose), Velissa Brooks (Garland) and Mamie Aaron. Grandchildren Naquan Woodard (Sherry), Crystal Knight (Gary), Kayla Brooks and Amythest Aaron. Great grandchildren: Naquan Jr. Juquan, Qyran, KeShaun, Tyrone, Shaniah, Shakir, Jamari and Josiah. He also leaves to mourn, his siblings: William Woodard (Cynthia), Bennie Richardson(Jackie). His two best friends, Mike and Ray who also are members of the Ford T-Bird Super Coupe Club and a host of nieces, nephews, cousins and friends. Our beloved passed away peacefully on January 15, 2022 with his family by his side, resting assured that to be absent from the body, those who love God, will be present with Lord.

Edward Douglass Woodard was born on February 10, 1942 in Baltimore, Maryland to the late Mildred and William Woodard. He graduated from Dunbar High School in Baltimore and continued his education at Dundalk College. Edward pursued a dedicated... View Obituary & Service Information

The family of Edward Douglass Woodard created this Life Tributes page to make it easy to share your memories.

Edward Douglass Woodard was born on February 10, 1942 in Baltimore,...

Send flowers to the Woodard family.