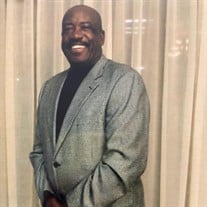 In lieu of flowers the family is requesting donations be made to the MARCH Foundation https://marchfoundation.org/ To watch service live, please click link below https://vimeo.com/600353992 Earnest Brown was the fifth child of the late Marguerite and Will Brown born on December 7, 1946, in Americus, GA. When he was three years old, the family moved to Cordele, GA where he received his early educational foundation in the public schools of Crisp County. Shortly after moving, he was baptized at Beulah Land Baptist Church in Cordele, GA. In 1960, the Brown family returned to Americus and Ernie graduated from Sumter County Senior High School in 1965. After graduation, Ernie moved to Cleveland, Ohio. He served honorably in the United States Army. After his enlistment ended, he returned to Cleveland where he met and married Mary Ann Hamilton. To that union, his son, Eric was born. While growing his family, he landed a job with the United Parcel Service (UPS). Ernie was known for his outstanding contributions to UPS. He began his career as a truck driver and quickly moved on to a Human Resources position and from there to various supervisory and executive positions. He retired as the UPS District Manager in North California. Ernie was a member of the Mutual Alliance Restoring Community Hope (MARCH) Foundation, an organization of retired African American UPS employees that support education for young African American youth. He enjoyed teaching young people how to be confident, independent, and strong leaders. Ernie was also a charter member of the Americus Investment Club; a group of men from Americus GA, who awards college scholarships to students graduating from Americus High School. Ernie was known for his kindness, generosity, and wisdom. He was also known for humor and “The Marguerite Said” wise cracks that kept everyone on their toes. Wherever Ernie went, he had an innate ability to make everyone feel special and would leave them with a lasting impression. His parties were infamous. Everyone came even if he only served popcorn and Kool-Aid. Ernie was an avid sports fan. He loved all Cleveland teams, the Indians, the Cavaliers and of course, the Cleveland Browns. He was an excellent golfer and bid whist player. He would spend hours and hours playing golf and cards with his family and friends. He made sure to never forget his roots. Ernie is preceded in death by his parents, Marguerite and Will Brown; his first wife, Mary Ann Hamilton-Brown; his brother, Willie James Brown; his sister, Gladys Brown-Williams; his brother-in-law, Herbert Williams; and his sister-in-law, Tommie Lee Brown. He leaves to cherish his memory, his devoted and loving wife, Vita Tyson Brown (Atlanta, GA); his son, Eric Brown (Augusta, GA); his brother, Alex Brown, Sr. (Americus, GA); his sister, Dorothy Brown Hubbard (Robert) (Albany, GA), and his sister, Ann Brown Washington (Cleveland, OH), one grandson, Elijah Brown (Tampa, FL); and a host of nieces, nephews, cousins, and friends. In lieu of flowers the family is requesting donations be made to the MARCH Foundation https://marchfoundation.org/

In lieu of flowers the family is requesting donations be made to the MARCH Foundation https://marchfoundation.org/ To watch service live, please click link below https://vimeo.com/600353992 Earnest Brown was the fifth child of the late Marguerite... View Obituary & Service Information

The family of Earnest Brown created this Life Tributes page to make it easy to share your memories.

In lieu of flowers the family is requesting donations be made...

Send flowers to the Brown family.