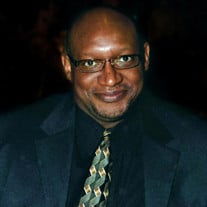 FOREVER IN OUR HEARTS DWIGHT ANTONIO GRAVES MAY 26, 1964 – FEBRUARY 12, 2022 Dwight Antonio Graves, lovingly known as “Tony”, was born May 26, 1964 to Regina Ann Graves and Robert Lee Hocker, Jr. in Danville, Kentucky. He was baptized at an early age at Hopewell Baptist Church in Newark, New Jersey. He attended and graduated from Clifford J. Scott High School, East Orange, New Jersey in 1982. As a student, he was active in Boy Scouts, played the trumpet with the CJS Marching Band, and was a placekicker for the football team. Graduating with honors, he received various college scholarships. Deciding to remain close to his mother Regina and baby sister, Dwight attended Stevens Institute of Technology in Hoboken, New Jersey, earning his Bachelors in Electrical Engineering in 1988. After receiving his bachelors, he started his career at ASCO in New Jersey as an Electrical Engineer; then later transferred to Chicago, Illinois continuing his employment with ASCO. He later pursued a Master’s Degree in International Business at the University of Texas at Austin. He then began a career as a Regional Sales Engineer Manager with Spectrum Detroit Diesel located in Kohler, Wisconsin. Dwight later worked with the Federal Aviation Administration, beginning on May 26, 2018 as an Engineering Technician. While in Chicago, Dwight met Glender Bell in 1994, they were married in 1998. From their union, two daughters were born, Danielle and Dominique. In 1999, the Graves family relocated to Georgia for a promising career opportunity and to sow roots to raise their family. Dwight was a protective and caring father and loving husband. He played an extremely active role in his girls’ lives; always present at school activities, class trips, and was a part of the Shiloh Dads Group within the Shiloh school community for many years. As the girls have grown into adulthood, Dwight and Glender have taken pride & joy in their accomplishments. Dwight was very talented in all aspects of life and was knowledgeable about everything; because of this, Dwight was everyone’s reliable source for advice. He was a doting husband, father, son, and brother who was very protective of his family. His favorite activity was reading a good Tom Clancy novel and he was an avid tennis player; he played for Sugar Creek & Waters Edge Tennis Clubs. Most renowned are Dwight’s travel adventures; he had a passion for traveling the world. His goal was to travel all seven continents. Dwight is preceeded in death by his paternal grandparents, Robert and Anna Hocker, his Father, Robert Lee Hocker, Jr. and Maternal grandmother, Emma K. Stewart. Dwight leaves to cherish his memories, his wife, Glender; daughters, Danielle and Dominique, mother, Regina Graves Williams and stepmother Evelyn Hocker; sisters Felecia Williams Ware (Kevin), Kathy Thompson and Kimberly Crumble (Sherman). He is also survived by his nieces KaSondra Vincent (Ronnie), Jacobi Hocker; and nephews Jeremiah Williams, Kivon Lewis and Jamarco Hocker; great nieces Bria and Maiyia; and great nephews Elijah, Rashad, and Ra’Colby; Cousins Lasonia Napier and Cornelius Stevens. Dwight is also survived by Aunts, Janette Napier, Brenda Hocker, Doris Hocker and Peggy Hocker; Uncles, Bobby J. Hocker (Jacqueline) and Willie G. Hocker, and Great Aunts Irene(Tiny) and Gooch (Ernest); Father/Mother-in-law Melvin and Versie Bell, sister-in-law, Cherie Bell (Derrick) and brother-in-law, Marvin Bell, and a host of cousins, nieces, nephews and extended family and friends, all who loved him dearly and will cherish their memories of him. Dwight Graves' service will be recorded and streamed live. In the event the service is interrupted at any time due to technical issues, the entire service will be uploaded and available to view by the next business day. Please copy and paste the link to share, or simply click on the link to view the service. https://vimeo.com/event/1059691 Service entrusted to Gregory B. Levett & Sons Funeral Homes & Crematory; Lawrenceville-770.338.5558

The family of Dwight Antonio Graves created this Life Tributes page to make it easy to share your memories.

FOREVER IN OUR HEARTS

Send flowers to the Graves family.