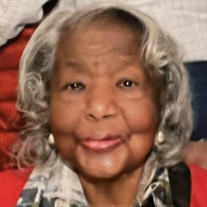 Dorothy Elizabeth Thomas was born May 30, 1928, in Ambler, PA. She was the only child born to her parents, the late Jeremiah and Gertrude Turner. On Tuesday, March 22, 2022, she departed this earth and now resides in the presence of the Lord Jesus Christ. Dorothy graduated from Ambler High School and attended nursing school and became an LPN. She worked at Chestnut Hill Hospital in Philadelphia, Pennsylvania for a few years, before working at Bell Telephone company of Pennsylvania, now known as Verizon. She worked there for 22 years and was blessed to be able to retire at the early age of 55. In her retirement years, Dorothy served her church and community faithfully. For several years she worked part-time as the secretary for Emmanuel Johnson Funeral Home, Philadelphia, PA. She worked as a volunteer at the Mattie Dixon Community Cupboard for over 25 years. In June 2016 upon her retirement, she was honored as their longest-running volunteer. Dorothy learned to play the piano at the age of nine when lessons were just 50 cents. She said she could play almost any song, as long as she had the sheet music in front of her. She was the pianist/organist for Emmanuel AUMP for over 40 years and 15 years for the children’s choir at Zion Baptist Church. Zion Baptist Church was her church home since she was 14 years old. She served as a Trustee Aid member and Treasurer of the I.R.S (Interested Retired Seniors). She also served as secretary of the Golden Age Club for many years. Dorothy lived om Ambler, Pennsylvania for 90 years and moved to Dacula. Georgia in 2018 to live with her daughter and son-in-law, Jacqueline and Timothy Twyman. Soon after her move to Georgia, she made Friendship Baptist Church her new home. In April of 2021, Dorothy started attending Grace Arbor in Lawrenceville, Georgia. She enjoyed the devotion, singing, and activities several days per week. Lisa, Tim, the volunteers, and her friends made it a very special place for her. A special thanks to family friend/caregiver, Nepheteria Pugh for attending with her. Dorothy leaves to cherish her memory; her daughter Jacqueline (Timothy) Twyman, son, Robert (Jennifer) Thomas and daughter Dyan Thomas; 11 grandchildren, 17 great-grandchildren; close cousins John Mahoney, Ida Mae Sheppard, Marie Hinton, Laverne Rose, Sheila Tolliver and a host of family and friends.

Dorothy Elizabeth Thomas was born May 30, 1928, in Ambler, PA. She was the only child born to her parents, the late Jeremiah and Gertrude Turner. On Tuesday, March 22, 2022, she departed this earth and now resides in the presence of the Lord... View Obituary & Service Information

The family of Mother Dorothy E. Thomas created this Life Tributes page to make it easy to share your memories.