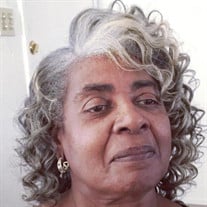 Dorothy Jean Roberts of San Jose, CA, passed away on March 12th 2022 at the age of 75. Dorothy was born in Neelyville, MO to Lofton & Mattie Beedles on January 16th 1947. She graduated from Neelyville High School in 1964. She married Larry Roberts on June 8th 1985 in Santa Clara, CA. Dorothy worked for Tandem Computers as well as Strouds Inc., and she ended her corporate career as a District Manager for all CA regions of Goodwill for 10 years, creating a position that never existed until she retired and dedicated her working hours to the church. She professed herself as a Christian in 1979 at the age of 32 under the tutelage of Superintendent James T. Roberts, pastor of Our Lord’s Temple COGIC. She and Larry moved to CA and she continued God’s work under the guidance of Superintendent Sherman Harris and 1st Lady Lily Harris of Greater Eastside COGIC. She then became an official Church Mother and from there, she began her journey in church administration and she would often say “I have been given the gift of administration, and yes that’s in the bible”. To have known Dorothy is to know love and laughter as she was a shining light and “mother” to all she met. Over the years she went by many names such as; Mother Roberts, Mo Rob, Big D, Dot, and Gma. She was also known for her witty retorts and often used a few key phrases such as; “I see said the blind man to his deaf and dumb daughter as he bumped into a stone wall” or “Goodnight, don’t let the bed bugs bite and if they do, hit them with a shoe” or “Let them eat cake” which was said often when her grandchildren would say they were hungry. Dorothy was a woman of many talents and she enjoyed bowling, writing (she wrote/published books for her great grandchildren), and singing (she made up songs for each grandchild). She was passionate about the Word of God, a dedicated prayer warrior, and diligent servant to the church. Her wisdom and love will forever be in the hearts of all those she mothered and mentored. Dorothy is preceded in death by her parents Lofton & Mattie Beedles, her siblings; Irma Lee Douglas, Willie Edward Franklin, Johnny Benjamin Franklin, Ruby Lee Franklin, Rosa Mae Franklin, Mae He’Lon Duckworth (Allen Duckworth), Samuel Robert Beedles, and her daughter-in-love Jessica Beedles (Corey). Dorothy is survived by her husband Larry Roberts, 4 children; Tamala Lambert (George), Corey Beedles, Trishaun Roberts, and Larry Roberts II, 9 Grandchildren; Le’Shaye Jones (Lee), Charvon Beedles, Caleb Jones, Althea Jones, Alexis Beedles, Elijah Beedles, Olivia Beedles, Isaiah Beedles, and Jeremiah Jenkins, 3 Siblings; Olivia Franklin, Glory Dean Watkins, & Albert Beedles and a plethora of great grandchildren, nieces, nephews, cousins, and friends. The family wishes to extend their sincere gratitude to all the family and friends who brought food, sent well wishes, visited with the family, made monetary contributions, gave their time & talents, and showed support during this most difficult time. In lieu of flowers, please consider a donation to the following charities: St. Jude Children Research Hospital and/or American Cancer Society Dorothy Beedles-Roberts' service will be recorded and streamed live. In the event the service is interrupted at any time due to technical issues, the entire service will be uploaded and available to view by the next business day. Please copy and paste the link to share, or simply click on the link to view the service https://vimeo.com/event/1838047

Dorothy Jean Roberts of San Jose, CA, passed away on March 12th 2022 at the age of 75. Dorothy was born in Neelyville, MO to Lofton & Mattie Beedles on January 16th 1947. She graduated from Neelyville High School in 1964. She married Larry... View Obituary & Service Information

The family of Dorothy Jean Beedles-Roberts created this Life Tributes page to make it easy to share your memories.

Send flowers to the Beedles-Roberts family.