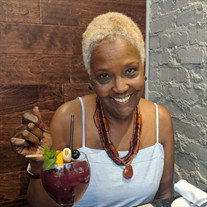 Doris Etta Doyle, daughter of the late Tamer Lue Marion and Levi Young, was born on September 21, 2021 in Waterford, Mississippi and raised in Oxford, MS. Doris graduated from Central High School in 1968. She attended The University of Mississippi, fondly known as Ole Miss, where she graduated with a Bachelor of Science in Sociology. After graduating from Ole Miss, she moved to Flint, Michigan and began her professional career working for the Urban League. Doris moved to Rochester, New York in the early 70s, where she continued her work with the Urban League. While in Rochester, she met her former spouse. She eventually settled in Schenectady, NY and gave birth to her daughters Rashida and Akilah. While in Schenectady, she worked for NY State Council on Children and Families, where she managed and coordinated casework for children with complex service needs. Doris later moved with her daughters to Richmond, Virginia, where she entered a new chapter of her life journey. She began consulting with Richmond Redevelopment Housing Authority and later joined the staff full-time. In an effort to seek greater opportunity for her daughters, she relocated to Gaithersburg, Maryland. In the fall of 2001, she was diagnosed with breast cancer and underwent a bilateral mastectomy, leaving her cancer in remission. Doris moved to Greater Atlanta, Georgia in 2002, to be closer to her mother, who was diagnosed with Alzheimer’s disease. She spent many days at her mother’s nursing home bringing her special home cooked meals with a slice of “frushly” baked pound cake. She continued her career in service where she worked and retired from the US Department of Housing and Urban Development. Doris began her battle with Gallbladder cancer in May of 2018. Although her diagnosis was advanced, she never let it stifle her life or livelihood! Upon receiving her diagnosis, one of her first questions to her Oncologist was, “Can I still go on my international vacation to Belize?”. Not only did she go to Belize, she also continued traveling domestically visiting family and friends across the country. Doris received her hospice diagnosis in July of 2021. Forever strong-willed and a continuous optimist, she went so far as to begin calling family and friends to communicate her own determination of her life expectancy. After transitioning to hospice, she enjoyed her time at home with her daughters, while continuing to welcome family and friends. She amazed, delighted, and spread joy to her hospice nurses and caregivers until her last moments. Doris conceded her fight with cancer on Sunday, September 5, 2021 with her daughters by her side. She is survived by her daughters Rashida Adanna Doyle and Akilah Jessica Doyle; siblings Lena Wiley, Gwendolyn Adams, Sylvia Mosley, Carolyn Johnson, and Larry Mosley; Jesse Doyle (former spouse); and a multitude of family members and loved ones.

Doris Etta Doyle, daughter of the late Tamer Lue Marion and Levi Young, was born on September 21, 2021 in Waterford, Mississippi and raised in Oxford, MS. Doris graduated from Central High School in 1968. She attended The University of Mississippi,... View Obituary & Service Information

The family of Doris Doyle created this Life Tributes page to make it easy to share your memories.

Send flowers to the Doyle family.