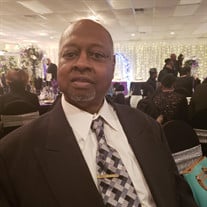 Donald Leroy Thomas, beloved husband, father, and friend was born on February 20, 1956, in Savannah, Ga, to Levi and Nellie Thomas. Raised in Savannah, Donald graduated from Savannah High School in 1974. Shortly after graduation, he joined the United States Air Force, in which he served honorably for four years. In October of 1975, Donald married his high school sweetheart and love of his life, Carolyn Jenkins. Donald and Carolyn, in their union lovingly welcomed three children, Donald Jr. and twins Latisha and Latasha Thomas, into this world. After his military service, Donald continued to work for the Federal Government as a civil servant while pursuing his education. With hard work, he graduated from the University of Maryland with his Bachelor of Science degree in Electronic Engineering. Donald traveled the world making lifelong friends due to his outgoing personality. He impacted everyone he connected with. Donald was kind, giving, fun, and enjoyed laughing with friends and family. Donald also enjoyed the outdoors and was a die-hard Atlanta Falcons fan. However, his most precious time was spent was with his children and later his grandchildren. He believed in quality family time and was devoted to the happiness and success of his family. Donald was called to his heavenly home on Saturday, September 18, 2021, joining his twin daughters, mom and dad, and other beloved family. Donald leaves to celebrate his life and cherish his memories his loving wife Carolyn, son Donald, Jr. (Denisha); sisters Kathryn Singleton of Monroe, North Carolina, Cynthdella Thomas of Atlanta, GA, and Angela (Alfonzo) Minor of Richmond, VA; sisters-in-love Teresa Martin and Yvonne Jackson, both of Atlanta, GA; grandchildren Daylen, Laiyah, Darius, and Takari; and a host of other relatives and friends.

Donald Leroy Thomas, beloved husband, father, and friend was born on February 20, 1956, in Savannah, Ga, to Levi and Nellie Thomas. Raised in Savannah, Donald graduated from Savannah High School in 1974. Shortly after graduation, he joined the... View Obituary & Service Information

The family of Donald Leroy Thomas created this Life Tributes page to make it easy to share your memories.