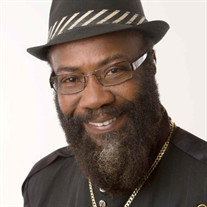 Denroy Adolfus Morgan Sr. passed away March 3, 2022, at the age of 76, after a brief journey with cancer. While many know him as an international iconic reggae artist, his loving heart, contagious smile, and unrivaled personality are what those who knew him personally will remember and cherish. Denroy was born on May 15, 1945, through the union of Cleveland and Una Morgan in Clarendon, Jamaica. He met the love of his life, Hyacinth, at the tender age of sixteen while working in his parent’s "shop" in Spanish Town. It was love at first sight, and the two started a family shortly after meeting. In 1965, Denroy migrated to the United States of America, where he single-handedly brought his parents, nine siblings, and later his wife and four children. In 1975, he had his Damascus road experience in a room in his parents' home. He famously calls this life-changing experience with the living God "his spiritual calling." During the 70's and 80’s, his home on Cornelia Street in Brooklyn, New York, served as a location for members of the Twelve Tribes of Israel Rastafarian Organization to come together. His life mission was to enlighten the world with the message of UNITY. Most importantly he fought to see a world where the “lion and the lamb will lay down together.” In 1981, his hit song "I'll Do Anything for You" and album of the same name hit the Billboard chart topping off the R&B Top 10 chart. In that same year, he became the first Jamaican recording artist to be signed to a major record label-RCA. In 1992, he brought his children of the musical groups Morgan Heritage and L.M.S. to Jamaica, where they both performed on Reggae SunSplash. Immediately after their performances, M.C.A. Records offered to sign the Morgan Heritage to the label. In 2006, he began to pioneer the "All Mansion" campaign, which focused on unifying various Rastafarian Organizations and Christian communities worldwide. Under his leadership, he created the petition for the United Nations to make the Coronation Day of H.I.M. Haile Selassie I on November 2nd an international holiday. A few of his most notable accomplishments include: being ordained as a Bishop to the International Gospel Helper Church in 2015; launching the Abrahamic Covenant Family Ministry; witnessing Morgan Heritage’s Grammy win in 2016; receiving the key to the City of Brooklyn in 2021 from the current Mayor of New York, Eric Adams; and an advocate for the legalization of cannabis in Jamaica and around the world after years of advocating for the “healing of the nation.” Denroy is predeceased by his parents, Pearl Foster (mother of six of his children), son Sarid, brother David, and grandson Micheal Jr. He is survived by his “virtuous” wife Hyacinth Morgan, Gail Moses (mother of six of his children); twenty-nine children, who are nurses, educators, counselors, business executives, designers, and even a pastor. One hundred and five grandchildren, including actors, musicians, filmmakers, athletes, and a lawyer. In addition, Denroy leaves behind twenty-one great-grandchildren, nephews, nieces, and five brothers and three sisters. His children will continue to honor his legacy by keeping God and family first.

Denroy Adolfus Morgan Sr. passed away March 3, 2022, at the age of 76, after a brief journey with cancer. While many know him as an international iconic reggae artist, his loving heart, contagious smile, and unrivaled personality are what those... View Obituary & Service Information

The family of Denroy Morgan Sr. created this Life Tributes page to make it easy to share your memories.

Send flowers to the Morgan family.