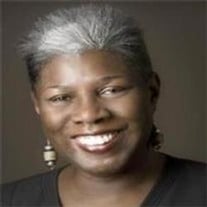 Celebrating the Life of Dr. Delorese Ambrose of Decatur, GA will be held 10:30 AM, Saturday, January 9, 2010 in our chapel. Rev. Keith L. Somerville, Officiating. Interment Eternal Hills Memory Gardens. *****Remembering Dr. Delorese Ambrose..."Dew"Delorese Ambrose was born Delores Elizabeth Williams, the eldest of four children born to Rose and Arnold Williams on January 31, 1949, in Jamaica. Delores' formal education took place in Jamaica where as a young child she attended Bethabara Primary School and as a young lady she obtained her secondary education at Manchester High School. She graduated from high school in Jamaica at the age of 15.After graduation, in the fall of 1964, Delores, along with her mother and two brothers immigrated to the U.S. to Brooklyn, New York to join their father who had moved to the States earlier to prepare for their new life in America.Delores made her first executive decision upon coming to the States by adding an "e" to the end of her name. The world would henceforth know her as Delorese. Delorese wished to continue her educational journey, however; rather than starting college, she chose to be with her peers and attended Wingate High School in Brooklyn for 2 years, resulting in her second high school graduation at the age of 17.Delorese attended Brooklyn College where she received her undergraduate degree. Her thirst for knowledge continued and her pursuits led her to the prestigious ivy halls of Columbia University, Teacher's College where she received her Master??s Degree in Communication and Doctoral Degree in Education specializing in Organizational Behavior in 1979.During her time as a student, Delorese was also a teacher. She was an Assistant Professor at Brooklyn College, City University of New York, from 1975 to 1980, and Adjunct Professor of Management from 1980 to 1998 at Carnegie Mellon University, where she also served as Assistant Dean of the School of Urban and Public Affairs. It was during this time, that she realized that the world could offer a much larger classroom. Delorese began to share her inspiring lessons in conferences and seminars internationally.Founder of Ambrose Consulting & Training, LLC, Delorese provided coaching and training for both the public and private sectors for such notable clients as: Boeing, Hallmark Cards, KPMG, the Commonwealth of Pennsylvania, the Internal Revenue Service, the Federal Reserve Bank, Shell Oil Company, the US Department of Defense, Environmental Protection Agency and the Veterans Administration just to name a few.She also lectured as a faculty member of the Institute of Management Studies (IMS) throughout the U.S. and in Canada, Amsterdam, Brussels, London, Manchester, and Scotland. Delorese was a noted writer and her life's work is immortalized in numerous publications including three books that she authored. Her contributions to the business community and world of academia have not gone unnoticed, and she has received numerous accolades and recognitions including the coveted Emil Limbach Teaching Award.Even with her many accomplishments, to her family she was simply "Della" or ??Dew" a nickname gleaned from her maiden initials. To her beloved grandchildren, she was "Nnena,"" meaning ??my father??s mother?? in the language of the African Igbo tribe and chosen in homage to the royal roots of her maternal ancestry. Both names are fitting as she was like the dew that comes with the dawn of a new day, refreshing the lives of those who came in contact with her. She was also a woman of regal bearing, comfortable among queens but never losing the common touch. She was a beautiful, positive and elegant role model for people of all colors.Delorese had the inner peace of someone who aligned her life??s work with her purpose in life. Her personal calling became that of helping people discover the meaning, satisfaction and joy in their work. She leaves a global legacy formed by the positive impact she made in the lives of many. She lived as if she could not fail and she never feared failure. The world will miss Delorese, but the world is a better place because she was here.Delorese is survived by her mother, Rose Eloise Williams, of Stone Mountain, GA; her only child, Christopher Tomlinson, her daughter-in-law, Lillian, her grandchildren, Olivia Rose and Grant Christopher, all of Loganville, GA; her brothers, Claude Williams, of Pittsburgh, PA, and Audley Williams, of Snellville, GA; her niece, Monique Barrett, of Los Angeles, CA; her nephew, Daniel Williams, of New York, NY; and, a host of cousins, extended family, dear friends and colleagues around the world.Delorese has known two great loves in her life, Desmond Tomlinson (married 1969-1973) and Ronald Ambrose (married 1975-1984).She was preceded in death by her brother, Brenton St. Hope Williams, who died shortly after birth.Delorese Ambrose departed this world on December 30, 2009, after a courageous two-year battle with breast cancer. Yet cancer could not take away the amazing legacy she left behind. Her life remains a dynamic example to many, and her incredible messages serve as valuable lessons for us to carry on.

The family of Dr. Delorese Ambrose created this Life Tributes page to make it easy to share your memories.

Celebrating the Life of Dr. Delorese Ambrose of Decatur, GA will...

Send flowers to the Ambrose family.