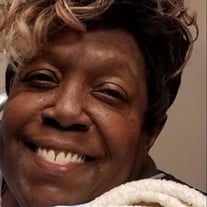 Delores (Wiley) Wilson, 69, of Lithonia Georgia, transitioned from labor to reward on April 14, 2022, 3:07 p.m. at Emory Hospital. Delores “Lorsie” Wilson was born on September 8, 1952 in Kokomo Indiana. She was the daughter of Ruth Jane & Lorenzo Wiley. At an early age after the death of her mother, Ruth Wiley, she & her siblings were taken in by two special aunts, the late Lorene Pitman and the late Vivian Embry. Delores received her education in the Kokomo Public School system. After graduating she welcomed a daughter, CaSandra Rochelle Wiley. During her time in Kokomo, she was employed at Kokomo Wire and Cable. On November 20, 1984 she was united in holy matrimony to Henry Wilson. To this Union was born a son, Jevon Jamau’ Wilson. She relocated to Atlanta, Georgia to be closer to family. While in Atlanta, she worked at MARTA Transportation System and Discovery Pointe. Delores gave her life to Christ at an early age. She was a member of Second Missionary Baptist Church in Kokomo IN. After relocating to Atlanta, she united with Power of Prayer, Pastor Beverly Hunt and later with Hope Egeneto Ministries with Apostle Terry Cummings. Family and serving others were the most important thing to Delores and she devoted her time to family and giving back to the community every chance she got. She was a part of the outreach ministry which consisted of feeding the homeless every Thanksgiving, a winter blanket drive for the homeless and Community Vacation Bible School. She leaves to cherish her memory, her devoted husband Henry J. Wilson, one uncle Billy (Bobbie) Wiley of Kokomo, IN, two aunts Ilene Junior and Ruth Wilson both of Arkansas, one daughter, CaSandra Wiley (Aaron) Jackson of Clarksville TN, one son, Jevon J. (Chantae) Wilson, one brother Ronald (Cheryl) Fowler of Kokomo IN, five sisters Patricia K. Embry, Joyce Wiley, Evelyn Jackson, Kathryn Blackmon (all of Atlanta, GA) and Anita Ellis (David) Moore of St. Louis, MO. Three grandchildren, Demarius Wiley-Hunt, Raven Wiley-Hunt, & Darrion Wiley-Hunt, three great grandchildren Nate Griffith, Onie Wiley-Hunt & Samir Wiley-Hunt and a host of cousins, nieces & nephews. She was proceeded in death by her parents, Ruth & Lorenzo Wiley, a brother Anthony Pitman. Delores will be missed by all who knew her.

The family of Delores Wilson created this Life Tributes page to make it easy to share your memories.

Send flowers to the Wilson family.