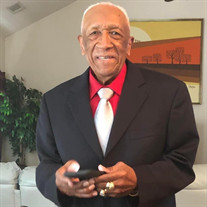 David DuBose, was born in Selma, Alabama on April 29, 1934 (1932 on record) to parents Derrick Brown and Eliza DuBose. David DuBose was raised in Birmingham, Alabama with his mother, stepfather and sister Pearlie, but frequently visited family members in Selma, Alabama and Detroit, Michigan. The Military Man In 1950, with the assistance of a dear aunt, David enlisted in the United States Army. He faithfully served his country as an infantry soldier until his retirement in 1977. Master Sergeant David DuBose was a proud airborne paratrooper who served one tour in the Korean War and two tours in the Vietnam War. While dutifully serving his country, Sergeant Major David DuBose earned many awards and honors for being such an admirable soldier; the National Service Medal (1OLC), Army Commendation Medal, Bronze Star Medal, Vietnam Service Medal, Vietnam Campaign Medal W/DVC 60, Vietnam Cross of Gallantry W7 Palm, Combat Infantryman Badge (1st AWD), Meritorious Service Medal, United States Service Medal, Good Conduct Medal, (6th AWD), Korean Service Medal, Master Parachutist Badge, and Republic of Korea Presidential Unit Citation. After 27 years of honorable military service, Master Sergeant David Dubose retired from the United States Army in 1977 and his last duty station was Fort Jackson, South Carolina. David The Family Man Master Sergeant DuBose was not only devoted to his country, but he was also a very devoted, dedicated and caring family man. While stationed at Fort Campbell, Kentucky; David met his first wife, Sarah, the mother of five children. David helped in raising his stepchildren as if they were his own. The couple’s family size increased to seven with the birth of their two adorable girls. While stationed at Fort Benning, Georgia; David met a beautiful woman, Jacqueline. They married in 1974 and gave birth to two children, another lovely daughter and a handsome son. In 1985, David and his family relocated from Columbia, South Carolina to the Atlanta, Georgia area. David The Person David attended college and earned an associate’s degree in business administration from Midland Technical College. In addition to his military career David also worked for the South Carolina Department of Corrections, and as an insurance agent for Independent Life. In 1990, David began his second career with the United States Postal Service. David retired again, for the second time in 2018 from the United States Postal Service. David was an extremely generous man who loved adventure, life, friends and family. He enjoyed the close friendships that he developed while bowling, shooting pool and attending social gatherings. He loved playing cards, cooking and spending time with his family and friends. David had a positive spirit that was contagious and he was a very sincere man. He was a mentor to many and never missed an opportunity to help anyone in need. David is loved and he will be greatly missed by his family, friends and all who were blessed to know him. The Family David was preceded in death by his mother Eliza, father Derrick, sister Pearlie Mae Stanley, Grandsons Derek DuBose and Billy DuBose. He leaves to cherish his memories; his beloved wife, Jacqueline DuBose, daughters Regina (Robert) Harris, Janice (Melvin) Hutchins, Erica Lasharne DuBose, and son, David DuBose Jr. Also, his step-children; Joyce Proudy, Evelyn Hayes, Charles Reeves (deceased), John Michael Reeves and Deborah McGregor, as well as a host of grandchildren and great grandchildren, two nephews, one niece and a host of other relatives and friends. The Light Remains “There are some who bring a light so great to the world that even after they have gone the light remains” (James Garrison) Celebration of Life Services for David Dubose will be held on Friday, December 10, 2021 at 1:00PM. These services will be recorded and streamed live. In the event the service is interrupted at any time due to technical issues, the entire service will be uploaded and available to view later in the day. Please copy and paste the link to share, or simply click on the link to view the service. https://vimeo.com/653804004

David DuBose, was born in Selma, Alabama on April 29, 1934 (1932 on record) to parents Derrick Brown and Eliza DuBose. David DuBose was raised in Birmingham, Alabama with his mother, stepfather and sister Pearlie, but frequently visited family... View Obituary & Service Information

The family of David DuBose created this Life Tributes page to make it easy to share your memories.

Send flowers to the DuBose family.